John Baackes is the CEO of LA Care Health Plan, a public health insurance plan providing coverage to over two million underserved individuals in California. Baackes refers to LA Care as the only functioning public option in the country, serving as an anchor in the state’s health insurance market to ensure the availability of affordable health care for low-income Californians.

In this Q&A, Baackes describes how although he believes public health insurance options are a great solution to high uninsured rates, they should exist in tandem with commercial plans rather than replacing them entirely. He also discusses LA Care’s continued effort to cover more undocumented individuals, his frustration at the lack of safety net-focused bills in the legislature and how his organization is addressing health disparities in California.

Eli Kirshbaum: Recent laws have granted greater Medi-Cal coverage to undocumented individuals, with California now barring immigration status from being considered in coverage eligibility for individuals under 26. The legislature and Gov. Newsom both support expanding this provision to seniors as well. Where does LA Care stand on this, and how do you plan to integrate more undocumented individuals into your services?

John Baackes: “The important thing to remember here is that this is 100% state money. So on all other Medi-Cal beneficiaries there is federal contribution, which, by the time you get through with all the math … it’s almost two-thirds paid for by the feds. So states take on the undocumented — they’re paying one-hundred percent of the bill. So many of us think, of course, somebody should provide health care to the undocumented because now, they wind up going to community health centers and federally qualified health centers and get treated almost as charity care, because that’s the mission of those organizations.

But we’ve seen that that is not a good solution because they don’t have continuity of care. When they have an emergency they wind up at the emergency room, and again, they wind up being a non-paying patient, and then we have all these other programs around to try to provide support to those safety net providers who will see them. So it seems much more logical to just [say], ‘Let’s just figure out what it’s going to cost to provide the care for them and do it that way so it’s more direct, and then we don’t need these safety net programs to kind of build the thing in.’

As an example, when I was in New York – and they have safety net programs for the uninsured – they paid for it through taxes on each person who had health insurance in the state. There was a head tax. And then every time someone was in a hospital bed there was a bed tax. And that money generated about three billion (dollars) a year back in the ‘90s, and that’s how they then compensated the hospitals and clinics that saw people for free, who didn’t have insurance.

We’re spending the money anyway, it just seems more logical to appropriate it directly for that, and then not depend on these other gimmicks to provide the safety net we need.”

EK: You have said you view LA Care as a form of a public health insurance option, and have written about how it can serve as a model for other states pursuing their own public option initiatives. What should other states planning to implement such programs — like Colorado and Nevada — learn from LA Care’s success?

JB: “We do talk about ourselves as the only functioning public option in the United States. And we’re using the definition of public option, but within the bill passed by the [U.S.] House of Representatives in 2010 — their version of the Affordable Care Act. Then they sent it over to the Senate and the Senate dropped it, so it didn’t make it into the final bill.

But in that legislation from eleven years ago, the House defined the public option as a government entity that competes in the individual market with commercial insurers. And the thought was that if you had a public entity that did not have shareholders and could operate on lower margins, that you would provide some good competition to the commercial plans. So the important thing to remember in the definition is the government was not setting the amount of reimbursement to the providers — that was left to the plan, the public option. It was assumed that the public option would be on a level playing field with the commercial plans, and that’s exactly what’s happened here in LA.

We have to put in a bid every year with Covered California to participate in the individual market exchange here in California. We also have to include a network of doctors, and we have to propose the price, so we have to do something to get the doctors to participate and allow us to have a competitive premium. And that’s what we’ve been doing since 2014.

There are sixteen public plans in California … They are all public entities and operate as not-for-profit corporations and with total transparency. Of those sixteen, we are the only one that participates in the covered California insurance marketplace for individuals. And our record has been pretty good. We’ve been in seven years now, we have 100,000 lives covered, and we only operate in Los Angeles County, where we’ve had five competitors all along. And by the fourth year of the program, we got to the lowest price point, which we enjoyed for two years.

Our competitors then sharpened their pencils and reduced their premiums for the sixth year, and we were in fourth position. And then we came back in the seventh year with a four-and-a-half percent rate decrease. And nobody’s dropped out, we’ve had the same competitors all along, and it’s worked. And that’s the point about the public option. It is not single payer, it is not Medicare for all. It is a public entity without shareholders that competes with the commercial plans on a level playing field. We have to meet all the same rules as the commercial plans to stay in Covered California.”

EK: What are some particular bills you are watching this session? What do you hope to see legislators accomplish pertaining to health insurance coverage?

JB: “Coming out of the pandemic, obviously we’re following the effort to increase coverage for the undocumented. So whatever they can work out, the broader it is the better. Ultimately, we think everyone needs to be covered.

[For] the rest of the bills that are in the Legislature right now, we were very concerned about the development of a health information exchange, which we’re supportive of but we want it to be on a regional basis not a statewide basis. That bill looks like it’s shelved. So I guess it’s more the bills we don’t see.

What I think the pandemic has shown is that Medi-Cal in California probably was the form of insurance used by most people who got COVID or were hospitalized. Because if you look at the demographic data of who got sick, who got hospitalized, and who died, it’s people that are eligible for Medi-Cal. And we certainly saw it in our claims during the height of the pandemic, and our financial performance was greatly affected by it last year.

So what I don’t see in the legislature is any discussion of how they are going to protect the safety net providers who really bore the brunt of it. Let me give you an example. MLK Hospital is a 130-bed community hospital in South Los Angeles. At the height of the pandemic in January, all 130 beds were filled with COVID patients. They had other patients that they put in beds, and conference rooms, [in] the gift shop — they kept running, and they were up to a couple hundred patients at one point.

You go to another teaching hospital in town, and at the height of the pandemic, 42% of their beds were filled with COVID patients. And so the difference is the teaching hospital had a mix of payers in their commercial [patients] as well as Medicaid and Medi-Cal, whereas for MLK hospital, all those patients were [eligible for] Medi-Cal that were in there, so they were getting the lowest level of reimbursement, and yet they had the highest amount of lift in terms of responding to the community.

We’re not taking the lessons learned and trying to make the safety net stronger by giving it the resources it needs. So there’s no bill along those lines, and I think that’s something that the Legislature needs to be talking about, and it needs to be a long-term, multi-year view.

[In] the basic architecture of how we pay for health care, Medicaid is at the bottom. And yet, the people who got sick during COVID were Medicaid members. Think about it. Most don’t realize that among our Medicaid members, almost a third of them work. It’s not a program for people that are not working — people are working.

…we had higher rates of COVID infections, hospitalizations and deaths among our [Medi-Cal] members. If Medicaid is going to be the fallback in a pandemic, because the pandemic follows the people that are the most disadvantaged because they can’t do the things that other people with more resources can do, then we should be treating it better instead of treating it as this sort of, “Oh yeah, and then there’s Medicaid,” and [giving it] a much smaller share of the pie.”

JB: “When the pandemic began, one of the things we noticed is that many of the people who had Medicaid — who were working, and had Medicaid — when they lost their jobs, they had health care coverage. But they didn’t have income, so they didn’t have food. So we saw — and we don’t handle this — the Department of Public Social Services reported to us that they had a 200% increase in applications for CalFresh.

Recognizing that, we launched a series of food pantries that we did from our community resource centers. We have eight of them across the county and we’re building six more. And these are basically streetfront health education centers and customer service outlets. So we organized food pantries at these events with other community organizations that could handle the food part. We handled the logistics and the advertising and the promotion of it … And [with] everyone we ever had, we’d give away all the food in two hours and there’d still be a line.

So we felt that was a way for us to begin to help people with basic nutrition during the pandemic, which is a very important issue for our members. We then ran a series of flu clinics in the fall because we were trying to get people to be vaccinated for the flu so that we wouldn’t have people getting infected with the flu and then competing with COVID patients for hospital beds and other resources.” 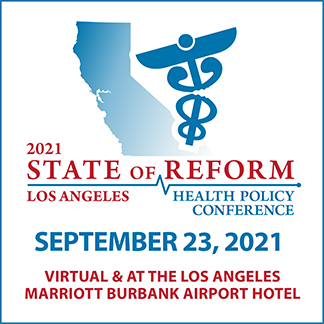