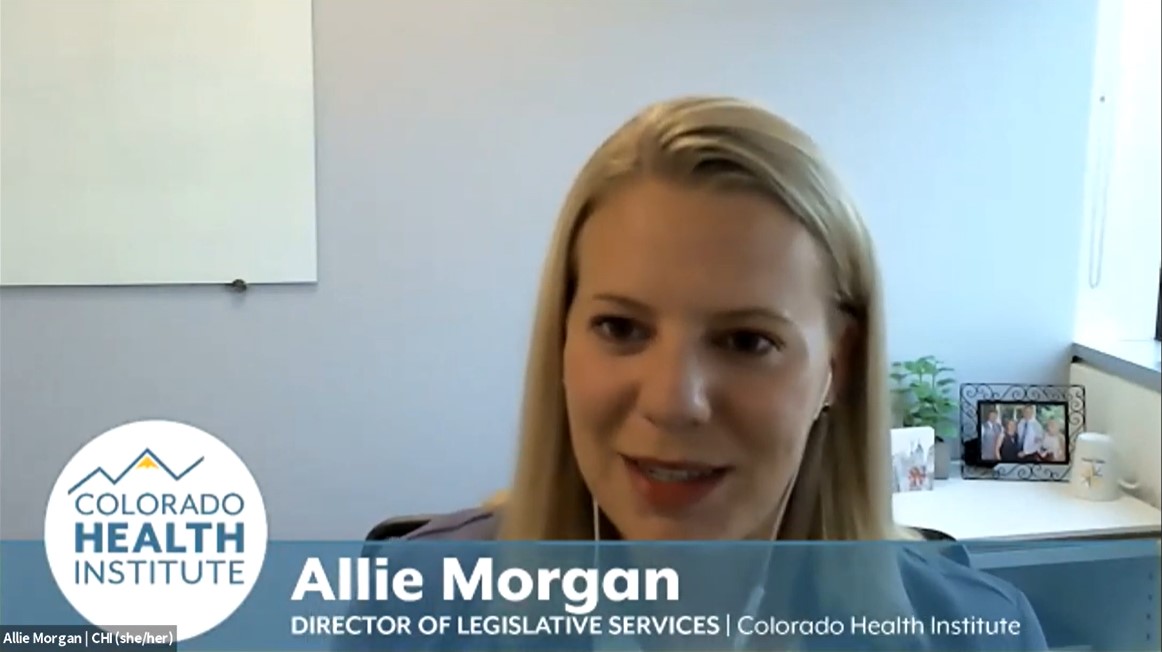 2021 a “landmark” year for health equity in Colorado

In a legislative session filled with bold policy initiatives, progress on health equity was one of the Colorado Legislature’s most notable accomplishments, according to Colorado Health Institute (CHI) staff.

Allie Morgan, director of legislative services at CHI, explained the “landmark” progress made during the session at a CHI webinar last week.

Morgan noted the diverse makeup of the current legislative body, saying the record number of Black, Latinx, and female legislators this year is likely the reason there were so many equity-focused bills. She also said the numerous younger legislators are behind some of this session’s more ambitious initiatives.

“This is a much different Colorado Legislature than we saw just a few years ago. The members are more diverse, many of them are younger, and many of them are bolder in their policy stances. That’s true on both the left and the right sides of the political spectrum.”

This year’s Black Caucus, Morgan explained, had nine members compared to having only two members ten years ago. She says many of the impactful policies from this session came from members of this growing caucus, including criminal justice reform and environmental justice.

Joe Hanel, CHI’s communications director who joined Morgan during the webinar, explained how significant HB 1251 is for criminal justice reform. This bill prevents the use of ketamine unless it’s used for a medical emergency. This prevents police from using it to detain people — as was the case in the 2019 death of Elijah McClain at the hands of the police in Aurora. Two members of the Black Caucus, Sen. Rhonda Fields and Rep. Leslie Herod, were prime sponsors of the bill.

Fields, who is also Chair of the Senate Health and Human Services Committee, spearheaded the effort to create a statewide Health Equity Strategic Plan. Fields’s bill requires the Colorado Office of Health Equity to establish a workgroup that will work to prevent chronic diseases in underserved areas of the state, particularly impacting people of color.

The over a dozen members of the Latino Caucus were key to the success of several bills impacting Latinx Coloradans, Morgan said. Data privacy protections for immigrants and increased access to multilingual ballots are among these policies.

She also said the Latino Caucus pushed housing protections that will benefit Latinx and immigrant communities. Hanel cited legislation to prevent evictions in the wake of COVID-19 as an example. Latinx Caucus members Sen. Julie Gonzales and Rep. Yadira Caraveo were prime sponsors of this bill. According to Sophia Ledeen, a research assistant at Harvard’s Joint Center for Housing Studies, Black and Hispanic individuals are at much higher risks of eviction than other races.

The presence of young women — some of which are also mothers — in the legislature spurred an increase in bills relating to reproductive health care and support for pregnant women, Morgan said.

“In addition to sending a message to young women that they can and should have voices in the state legislature, we’ve seen more support for policies that are directly in their interest.”

Sen. Brittany Pettersen sponsored a bill to increase diaper access for Colorado mothers who might not have access to them. Rep. Brianna Titone led the effort to provide free menstrual products to students.

SB 193 — which lays out standards of care for pregnant women in correctional facilities — and SB 194 — which extends the Medicaid eligibility period for new mothers to a year — will have considerable impacts on pregnant women, Hanel said.

Sarah McAfee, communications director for the Center for Health Progress, said health equity progress is also likely to be seen in bills in other areas.

“It’s important to note that health is much more than health care, and so there were additionally a number of bills whose impact on health equity could be even more outsized than that of the health care bills that passed. We improved the rights of agricultural workers, removed some barriers to public programs for immigrants, protected Coloradans’ personal data from misuse by government agencies, and there were a host of housing, criminal justice, tax reform, and other bills that address some of the social determinants of health.”

When asked whether she agrees with CHI’s statements on this year’s health equity progress, McAfee said that can’t be concluded until the bills are implemented and the results are seen.

“Whether or not the session was a landmark year for health equity will be determined through the hard work of implementing these bills with intention, transparency, and accountability.”