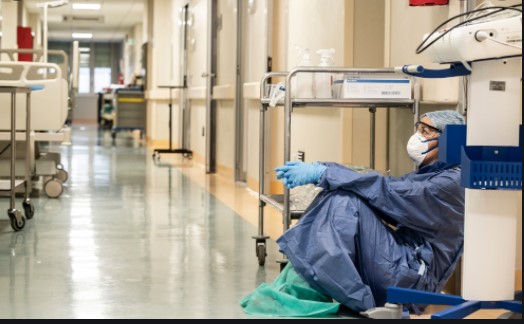 During the acute phase of the COVID-19 pandemic, emergency department doctors, nurses and other frontline staff experienced unprecedented levels of stress and emotional exhaustion that included nightmares or insomnia, according to a UC San Francisco-led study of emergency departments across the country.

The study, among the first to assess mental health effects of the pandemic at a geographically diverse sample of emergency rooms, found that nearly one-fifth of the ER staff were at elevated risk for post-traumatic stress disorder (PTSD).

The study also reported that regular testing for COVID-19 helped to reduce stress among emergency personnel, particularly for those with previous positive antibody results.

The results are published April 9, 2021, in Annals of Emergency Medicine.

“As the nation moves into what many believe is a fourth wave of COVID, this study is important to our understanding of the impact of the pandemic on the mental well-being of frontline medical personnel,” said lead author Robert M. Rodriguez, MD, a professor of Emergency Medicine at UCSF.

“We found that feelings of work-related anxiety, emotional exhaustion and burnout were prevalent across the full spectrum of emergency department staff,” Rodriguez said. “Early recognition of the signs of stress, burnout, anxiety is critical. Emergency department personnel serve as the initial hospital caregivers for the majority of critically ill patients with known or suspected COVID-19 infection. Protecting and maintaining the health of the emergency department workforce is imperative in the ongoing battle against COVID-19.”

The study was conducted between May and July 2020, using electronic surveys to document self-reported symptoms before and after serologic testing for SARS-CoV-2 antibodies.

Participants had not previously been diagnosed with COVID-19. After the initial survey, they underwent serial nasal swab PCR and serum antibody tests, then completed a follow-up survey.

“Considering the relatively high levels of burnout symptoms, and that more than half of participants reported experiencing at least one symptom of PTSD and as many as 20 percent were at higher risk, employers should encourage workers to take time off, get adequate rest and utilize available well-being resources,” said Rodriguez.

The researchers had previously reported moderate to severe stress levels during the pandemic, but that study was limited to academic emergency medicine physicians in California, New Jersey and Louisiana. In one difference between the studies, researchers found that personal protective equipment (PPE) was no longer among the top five listed worries in the later study, suggesting that PPE became more widely available.

This press release was provided by the University of California San Francisco.