A report released by the Office of the Corrections Ombuds (OCO) found that delays in cancer diagnosis and treatment in Washington State Department of Corrections (DOC) facilities led to death for at least one patient, and terminal diagnoses for several others.

This report comes after previous investigations performed by the OCO. In one such report, the OCO concluded that multiple failures by staff at Monroe Correctional Complex led to the cancer deaths of two inmates. The new report is broader and examines delays that happen at facilities across the state.

The men in the report range from 34 to 68. All had reported symptoms being brushed off by staff, indicates the report. Some of the symptoms reported included shortness of breath, painful urination and blood in urine, skin lesions, painful swallowing and abdominal pain.

The average time to diagnose for the eleven cases included in the report was approximately 6.5 months, with a range of two to 17 months between the time of initial presentation until the diagnosis was made.

The patient that experienced the delay because staff refused to bring him to the clinic was Patient E, a 34-year-old Black male who had reported symptoms of abdominal pain along with fever, chills, nausea and vomiting.  He was treated for constipation but he continued to experience symptoms and a reported weight loss of 40 pounds in 6 weeks. He continued to report no relief with the prescribed medications. The report describes the refusal of staff to bring the patient to the infirmary:

“In early August 2020, Patient E sent another medical Kite [a written request] asking his provider to schedule a gastroenterology consultation due to ongoing symptoms. At that time, the pain had become so severe that he could not sleep. The on-call provider recommended that Patient E be brought to the infirmary for an evaluation the following day, but a shift lieutenant would not bring Patient E to the clinic because he was not on the call-out list.

Although there is only one documentation of this in the medical chart, Patient E stated that this refusal by IMU staff occurred on several occasions. Over the next two days, the pain became worse; Patient E was unable to eat and was having abnormal bowel movements. He told the nursing staff “I feel like I’m going to die;” he requested admission to the IPU or the hospital, but the provider added him to the sick call schedule for the following day. A DOC nurse told Patient E that he needed to go to the hospital, but the provider refused this recommendation. On 8/12/2020, x-rays demonstrated a possible developing obstruction, and he was sent to the ER.”

At the ER, Patient E received a CT scan and a large mass was found obstructing the colon, he underwent surgery to remove the mass and was awaiting a follow-up for additional surgery.

The average of 6.5 months to diagnosis is far longer than the one-month target that is identified by experts. The report says:

“The World Health Organization and National Institute for Health and Care Excellence have identified a target of no more than one month from presentation to diagnosis for cancer cases. The target to start treatment is also set to within one month of diagnosis. Overall, the time from symptom onset to the start of treatment should be less than 90 days to reduce delays in care, avoid loss to follow-up and optimize the effectiveness of treatment.”

So for Patient A, who presented with a skin lesion that was eventually identified as Melanoma and who has since passed away, the survival rate for Melanoma before it spreads is 91%, meaning that if the DOC staff had provided adequate treatment, he had a 91% chance of living for at least five more years.

For Patient B, who at the time of the report was told he had 9-18 months to live, the survival rate for localized Prostate cancer is about 100%. Patient B, a 56-year-old Black man with a history of intermittent blood in the urine since 2017, had been asking for Prostate cancer screening because of a DOC guide that recommended African American men over the age of 40 get checked for Prostate cancer. However the report said his provider and the facility medical director declined to provide the testing. 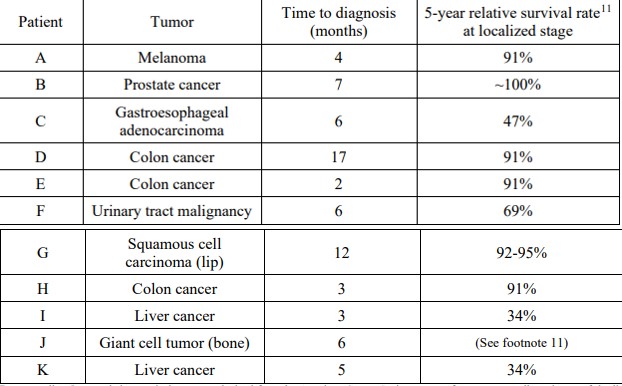 Image provided by the OCO Report

In a written response to the report, the DOC acknowledges the problem:

“The OCO investigation which details histories of incarcerated individuals diagnosed with cancer demonstrates patient care timelines which do not meet our goals for the quality of care DOC Health Services intends to provide to our patients. It is not acceptable for those under our care to experience waits for diagnostics and treatments that could potentially impact their well-being.”

They also said the DOC has asked the Legislature for more money to fund increased staffing and to fund an electronic medical record system.

The OCO had recommended these changes in their report, but stated that there needs to be a change to the scheduling system currently in place, because the process for getting an Electronic Health Record can take years.

The OCO report ended with:

Nevertheless, DOC has a duty to provide timely access to necessary medical care, and to meet accepted care delivery standards. These cases demonstrate the need to improve several care delivery processes within DOC, to ensure the best possible outcomes for patients with a cancer diagnosis. OCO appreciates the opportunity to work collaboratively with DOC to identify solutions and strategies to promote positive change.”