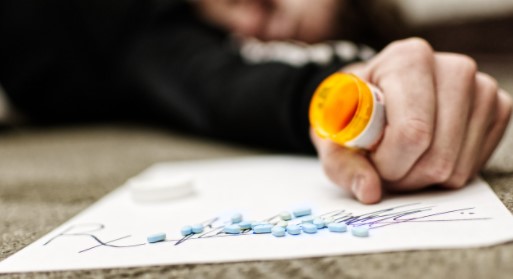 Research provided by California Health Policy Strategies (CHPS) shows that the rate of increases of overdose deaths in California far surpasses the national rate of increase as of May 2020. Experts say this trend has increased as the pandemic has continued.

California saw 7,121 deaths reported as drug overdoses in the May 2020 12 month-ending period, the national number at the same time was 79,251. This is part of a skyrocketing rise, with overdose deaths in California up 26.8 percent in the period between June 2019 and June 2020. Nationally, in that same time frame, deaths were up 21.3 percent.

“It’s a wave and it’s not done cresting,” said Konrad Franco, a researcher at CHPS and the creator of the chart featured below. 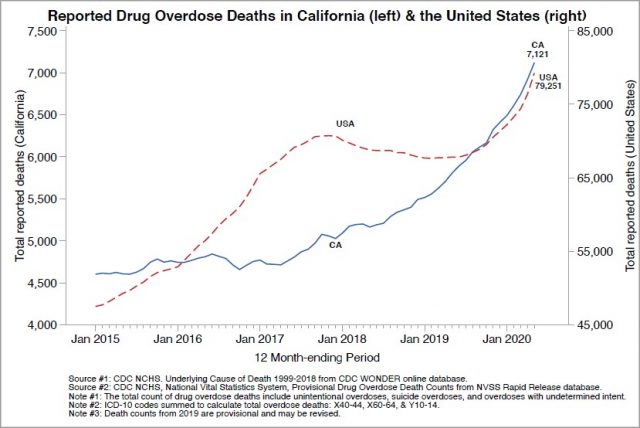 “I don’t think the general public really understands the scope of the epidemic,” said Franco. “If you look in individual counties’ data and in all of 2020, 3 times more people died in San Francisco [of drug overdoses] than they died of COVID.”

One of the main causes of the trend is an increase in the use of fentanyl in California, a drug where a single misstep in the dosage can lead to an overdose, said Dr. Aimee Moulin, behavioral health director at the Emergency Department at U.C. Davis and a co-principal investigator with the California Bridge Project. Fentanyl is a synthetic opioid similar to morphine but about 100 times more potent.

“In the past, we have been very heavy on stimulants, methamphetamines predominantly with heroin kind of in the background, and that has shifted dramatically towards fentanyl over the past year, “ said Dr. Moulin.

Fentanyl is also killing a lot of young people, said Dr. Moulin. Those aged 20-34 years old died more from fentanyl overdoses than from other types of drugs.

“The frightening thing is how young these people are, the folks that are using fentanyl are young,” said Dr. Moulin. “We’ve had some teenagers overdose recently. So when you look at these numbers and you see that spike up there, these are people and they are young.”

This increase in the use of fentanyl may not, however, be a result of overprescribing of opiates by doctors. Franco says California has actually seen about a 25 percent decrease in prescriptions since 2015.

The Trump administration introduced new addiction treatment guidelines Thursday that allow doctors to prescribe buprenorphine. Before this change, doctors had to take an 8-hour course to receive a license, called an “X-waiver”, to be able to prescribe the drug. This was a barrier for entry to many physicians.

The pandemic however is expected to have caused an increase in the rise in overdose deaths. The CDC reports an increase in mental health issues, increased substance abuse and suicide ideation during the pandemic.

“The pandemic has been disruptive in a lot of ways. People have moved, people have lost their jobs, so your usual source of care gets disrupted, so that causes a lot of gaps in care,” said Dr. Moulin. “Plus the social stressors, people who were previously in treatment, [their] clinics were closed, lost their insurance, so that disrupts their treatment. On top of that, all of the social isolation, economic insecurity, and [then] they relapse.”

However Dr. Moulin said that California is better positioned to recover than most states with similar trends due to buprenorphine being covered by Medi-Cal. California is also changing how they provide drug treatment services through Drug Medi-Cal.

“It provides, through this new organized delivery system, an array of new treatment services,” said David Panush, president of CHPS. “From residential treatment to outpatient services and everything in between. So it moves our drug treatment delivery system into the 21st century.”

Dr. Moulin believes that the decriminalization of drugs would help enable people to seek treatment. Especially because the war on drugs was racially biased and the criminal justice system does not help treat the disease, said Dr. Moulin.

“Substance use disorder is a medical disease,” said Dr. Moulin. “It’s treatable, it’s a brain disease. We have essentially criminalized a disease, which increases stigma. It’s the only medical diagnosis that is a crime.”

This trend will not disappear after the pandemic has ended either, said Dr. Moulin.

“I think we’re going to have a lot of digging out to do,” said Dr. Moulin. “Next year when we’ve vaccinated everybody, we will still be digging out from this.”