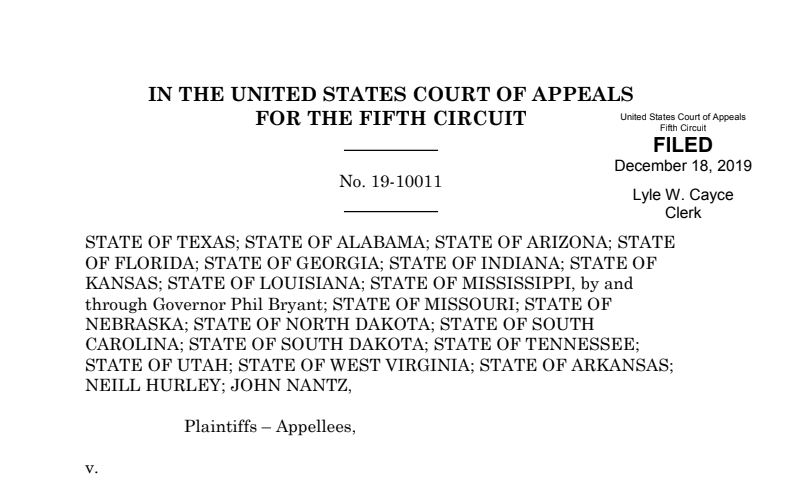 There is a lot of coverage about last night’s ACA decision, but little of it got in the weeds of what this might mean moving forward.

So, we dug into the ruling, reviewed the process, and wanted to share with you four things we think are worth knowing about this case.

1.  This is a conservative appellate court, but that may not mean what you think

Consequently, some observers thought this set up for a very conservative decision this week.

That’s not quite what happened in a political sense, though it may have been somewhat accurate in a jurisprudence sense.

By that I mean for political observers, this was not a decision that was strongly against the ACA.  Instead, it showed some judicial restraint, adhering to a degree to process and allowing this legal review to continue.

On three key questions, the Appellate court took a cautious, process-centered route. On a fourth, it exercised a more “activist” position, conservative in a political sense.  But it didn’t do so in a way that re-wrote the ACA or struck down provisions beyond the narrow question on the mandate.

This was largely a cautious decision.

2.  The process from here

Second, it’s good to talk about the process itself before we get into the weeds of the ruling.

Here, I can commend a smartly written summary by the Commonwealth Fund.

The judges agreed with a lower court decision issued in the case, Texas v. U.S., in December 2018 that the individual mandate is unconstitutional but, unlike the lower court, did not decide that the rest of the ACA is also unconstitutional. Instead, the judges remanded, or sent back, the decision to the same lower court judge to consider. California Attorney General Xavier Becerra, who is leading the 21 Democratic state attorneys general defending the law, along with the U.S. House of Representatives, immediately announced he would appeal the decision to the Supreme Court.

3.  On the question of the individual mandate

That leads us to the decision itself.

The 5th Circuit decided on four primary questions.  First, it answered two questions related to standing and whether the case was a legitimate case. Those are important decisions for future legal review, by the Supreme Court for example. So, it sought to help lay that groundwork by thoroughly addressing those.

While those are interesting questions if you’re a law geek, I leave those aside for this post.

The third question is on the individual mandate itself, and whether it can be considered constitutional now that Congress has effectively reduced the tax to zero.  In other words, the law remains on the books, but there is no penalty for failure to have insurance.  Does that mean the penalty is still real and in effect?

In the key Supreme Court decision on this case, NFIB v Sebelius, Chief Justice Roberts held that the individual mandate was constitutional because it was a tax. And, since levying taxes are an express power of the legislative branch, this mandate penalty works because it’s a tax.

That logic was used to turn the constitutionality question on its head in the 5th Circuit opinion.

NFIB could not be clearer that the “produc[tion]” of “at least some revenue for the Government”—not the potential to produce that revenue—is “the essential feature of any tax.” As the district court observed, when determining whether a statute is a tax, the actual production of revenue is “not indicative, not common—[but] essential.”

In other words, without any revenue, there isn’t a tax. And, since it’s not a tax, there isn’t any clear power that Congress holds that could compel such an action, of buying insurance, and is therefore unconstitutional.

The individual mandate is unconstitutional because it can no longer be read as a tax, and there is no other constitutional provision that justifies this exercise of congressional power.

This logic is interesting from a legal perspective.  Justice Roberts is likely the swing vote on this case. If he thinks there is a new question here on the definition and applicability of a tax, and its consequent support for the constitutionality of the ACA, then the Supreme Court might take this up for review.

4. On the question of severability

The fourth key question in the decision is about severability, and the ability of the rest of the law to stand absent the individual mandate.

On the severability question, we remand to the district court to provide additional analysis of the provisions of the ACA as they currently exist.

The 5th Circuit told the district court to go back to work on this, punting the quesiton to the lower court rather than teeing it up for a Supreme Court review.

On the question of constitutionality of the individual mandate, the 5th circuit looks to guidance from the NFIB case that the Supreme Court decided in 2012.  In that decision, severability was also in question. In fact, I explored it as a centrally important question at the time which could have led to the dismissal of the entire statute.

Roberts’s 2012 decision looked beyond the language of the statute, and the absence of a severability clause, to measure legislative intent.

Our “touchstone for any decision about remedy is legislative intent, for a court cannot use its remedial powers to circumvent the intent of the legislature…  The question here is whether Congress would have wanted the rest of the Act to stand, had it known that States would have a genuine choice whether to participate in the new Medicaid expansion. Unless it is “evident” that the answer is no, we must leave the rest of the Act intact.

This statement related to Roberts’s re-writing of the Medicaid expansion provision to allow states to opt-in to expansion participation. However, the Roberts’s logic applies to the current question of the individual mandate as well. Perhaps this is why the 5th Circuit remanded the question to the district court – because the NFIB ruling pretty clearly allowed for the severability clause to exist.

Now, this question gets more complicated because of the arguments of the Obama administration at the time. They argued that each of the pieces of the law were important.

But, unless Justice Roberts has changed his mind on severability, it would seem that the question the 5th Circuit has teed up will not repeal the full ACA.  In fact, it would appear that it could strengthen and re-affirm NFIB, allowing the five majority justices to re-affirm the decisions made back in 2012.