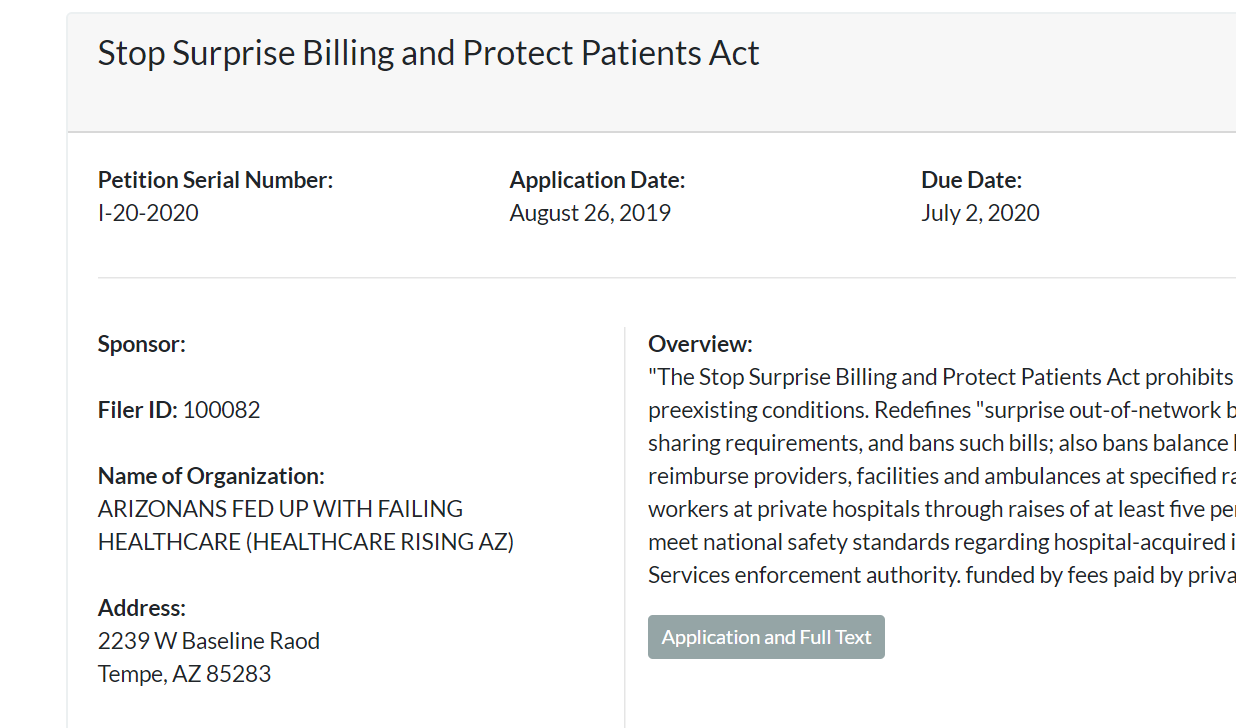 A new initiative filed for the 2020 ballot will tee up a number of health care issues for Arizona voters to consider.

It’s a thick initiative, which codifies a number of the benefits of the ACA into Arizona law.  For example, the initiative disallows insurers to deny coverage based on pre-existing conditions.  It also creates a “guarantee issue” clause, which further protects an individual access to insurance coverage in the individual and small group markets.

These are standard elements of the federal Affordable Care Act passed in 2010 and in effect since 2014.  However, a court case seeking to overturn the ACA would remove these protections if successful. A number of states have moved to codify such protections in state law should the ACA get repealed in the courts.  This initiative would do the same for certain provisions.

The initiative adds additional consumer protections like a prohibition on “surprise out-of-network bills and ambulance balance bills.” It requires hospitals to meet a standard for hospital-acquired infections, and raises the minimum salaries of direct-care hospital workers.

Here is the initiative overview from the Secretary of State:

The initiative is being organized by Arizona Healthcare Rising, a group led by SEIU-United Healthcare Workers.

In a commentary piece at State of Reform, SEIU-UHW spokesman Sean Wherley said this effort fell in line with SEIU’s recent work that spreads beyond its membership to impact the larger community.

“This effort is a continuation of the work we did in 2016 to raise the minimum wage and provide paid sick leave to Arizona workers through The Fairness Project. SEIU-UHW sees its mission as helping working people and their families improve their lives and standards of living. We believe we cannot be successful if all we care about is our narrow interests, and so we work in the broader public interest as well and have been doing so for nearly a decade.”

The Arizona Hospital and Health Care Association raised a red flag quickly upon the initiative being submitted this week. They have concerns about the impact on costs to hospital operations.

Ann-Marie Alameddin is the CEO of the Association. In a statement, Alameddin said the initiative may be about more than consumer protections.

“This California-based union, famous for picketing hospitals, is asking Arizonans to vote for an initiative that won’t improve their healthcare and will end up costing them more. Moreover, it has a track record of using ballot initiatives not to improve healthcare in Arizona, but to leverage its bargaining position with California hospitals.”

The initiative would require hospitals to increase the wages of practically all non-managerial hospital employees by five percent upon implementation of this initiative.  It would require an additional five percent increase every year thereafter for an additional three years. When compounded over the four years, this would result in a 22% pay increase for hospital staff, ranging from nurses to food service workers.

Initiative supporters have until July 2nd next year to gather 237,645 signatures to put the question on the ballot. SEIU says they hope to do this with volunteer signature gatherers only.