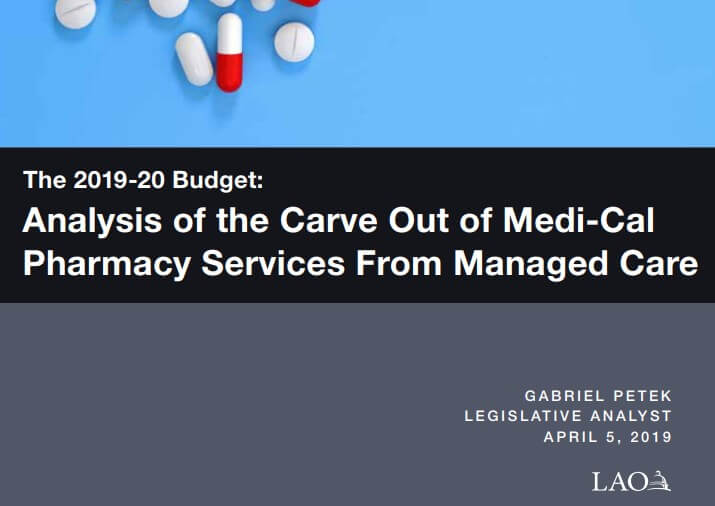 The Legislative Analyst Office released a new report this week on the potential impact of a Medi-Cal carve out for managed care pharmacy services. The new policy came out of Governor Newsom’s Executive Order on drug pricing signed in early January 2019 that directs the Department of Health Care Services (DHCS) to transition Medi-Cal managed care pharmacy services to a fee-for-service (FFS) benefit by January 2021 as part of an effort to leverage the state’s size and power to impact rising prescription drug costs.

The Governor’s Order relies on the premise that consolidating drug purchasing under a state-wide purchasing system will give the state a strong bargaining position to negotiate lower bulk drug prices.  Specifically, the Order charges DHCS, in concert with the California Pharmaceutical Collaborative, to come up with a list of the 25 highest-cost drugs to prioritize for bulk negotiation.

According to the report, in 2018‑19 overall Medi-Cal spending for pharmacy services was around $8 billion. Around 70 percent of pharmacy spending occurred in the managed care delivery system, with the remaining 30 percent as fee-for-service. In the LAO’s assessment, the carve out can be expected to promote Medi-Cal savings by lowering the state spend on drugs to cost and by increasing the state’s collection of supplemental rebates on drugs as more drugs fall under its umbrella for negotiation. But, the savings are not without potential downsides.

After significant review of potential costs of the program as compared with savings, the LAO report concludes that while the program is likely to result in net savings to the state in the hundreds of millions of dollars annually, those savings should be balanced against potential impacts on major Medi-Cal stakeholders including enrollees, pharmacies, providers, and Medi-Cal managed care plans.

Potential impacts of a carve-out cited in the report are:

Due to a lack of information, however, the LAO’s report had difficulty predicting the actual scope of these impacts. In light of these concerns, the LAO offers four alternative approaches to the carve-out for reducing Medi-Cal prescription drug spending and includes the background, benefits, and downsides for each. The analyzed alternatives include: