Priscilla VanderVeer is the Deputy Vice President of Public Affairs for PhRMA. In this op-ed she talks about the new startup accelerator in LA County, BioLA and its potential impact for nurturing innovation in the LA area.

Los Angeles is ready to up its game in the life sciences field.

After seeing far too many of its home-grown researchers and scientists leave the area to pursue careers in the life sciences, a new collaborative was started last year to stimulate investment, grow jobs and spur innovation for new cures and treatments in Los Angeles County.

BioLA was founded in 2018, with the aim of serving as an entrepreneurial hub for government, research institutions and private investors to accelerate startup activity within the County and amplify economic activity. BioLA will help coordinate academic institutions, research hospitals, investors, startups, mature companies, trade associations and public and quasi-public agencies to advance the pace of innovation.

Global and national organizations recognize the potential to expand the region’s development of breakthrough cures and treatments and are supporting the effort. On February 19, the Pharmaceutical Research and Manufacturers of America (PhRMA) President and CEO Stephen J. Ubl announced the association is making a three-year, $750,000 investment in BioLA and joining their board.

“PhRMA is committed to helping make Los Angeles a bioscience powerhouse on par with San Diego and the Bay Area and solidify California’s well-established prominence as a global life sciences leader,” said Ubl. “Los Angeles is home to world-class academic and research institutions, has a strong entrepreneurial spirit and a robust and diverse workforce that offer a solid foundation for bioscience innovation to take root and grow.”

Ubl added, “Small start-ups, like the ones BioLA will support, are a critical part of the biopharmaceutical ecosystem. New medicines developed by startups not only advance science and human health, but also bring jobs and economic growth to their communities.”

At the announcement, Ubl was joined by Los Angeles County Supervisor Mark Ridley-Thomas – who has championed the growth of biosciences in the region – BioLA’s strategic adviser and interim CEO, Daniel Tellalian, Dina Lozofsky of Biocom Los Angeles and Richard Zalidvar of The Wall Las Memorias.

“Through BioLA, we will harness our medical and scientific expertise in partnership with the business community to become a world leader in treating and curing serious disease,” said Supervisor Ridley-Thomas. “BioLA will serve as the catalyst that will fuel greater investment and innovation and create a business environment that allows startups to thrive in Los Angeles County.”

“PhRMA’s support of BioLA sends a message across the country and around the world that this region has the backing of the major players who bring new medicines to market, improving health outcomes for us all,” said Tellalian. “We are going to help California, from Bay to Beach, become the world’s center for biosciences.”

Venture capital is the most important source of startup financing, and these types of investments in biopharmaceutical companies have increased by more than 160 percent since 2010. A large share of this investment comes from affiliated PhRMA member company corporate venture capital affiliates, which make such equity investments in part to support their own innovative research. 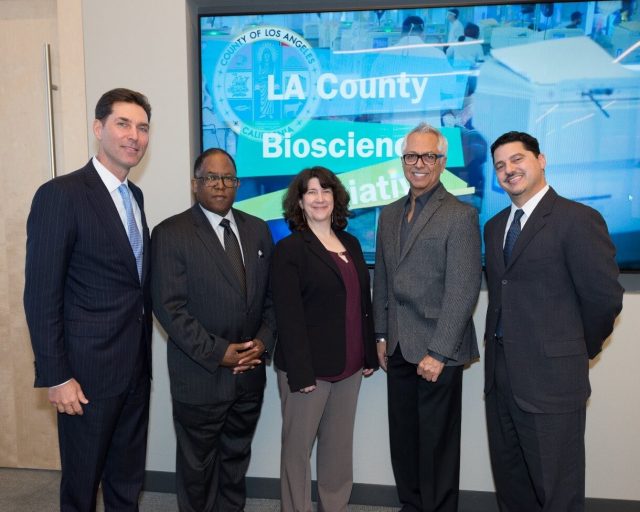 California is a global leader in biopharmaceutical research, development and manufacturing, supporting nearly 900,000 jobs in the state and infusing $290 billion into the economy.  Los Angeles County and Southern California overall have become a growing part of that economic engine.