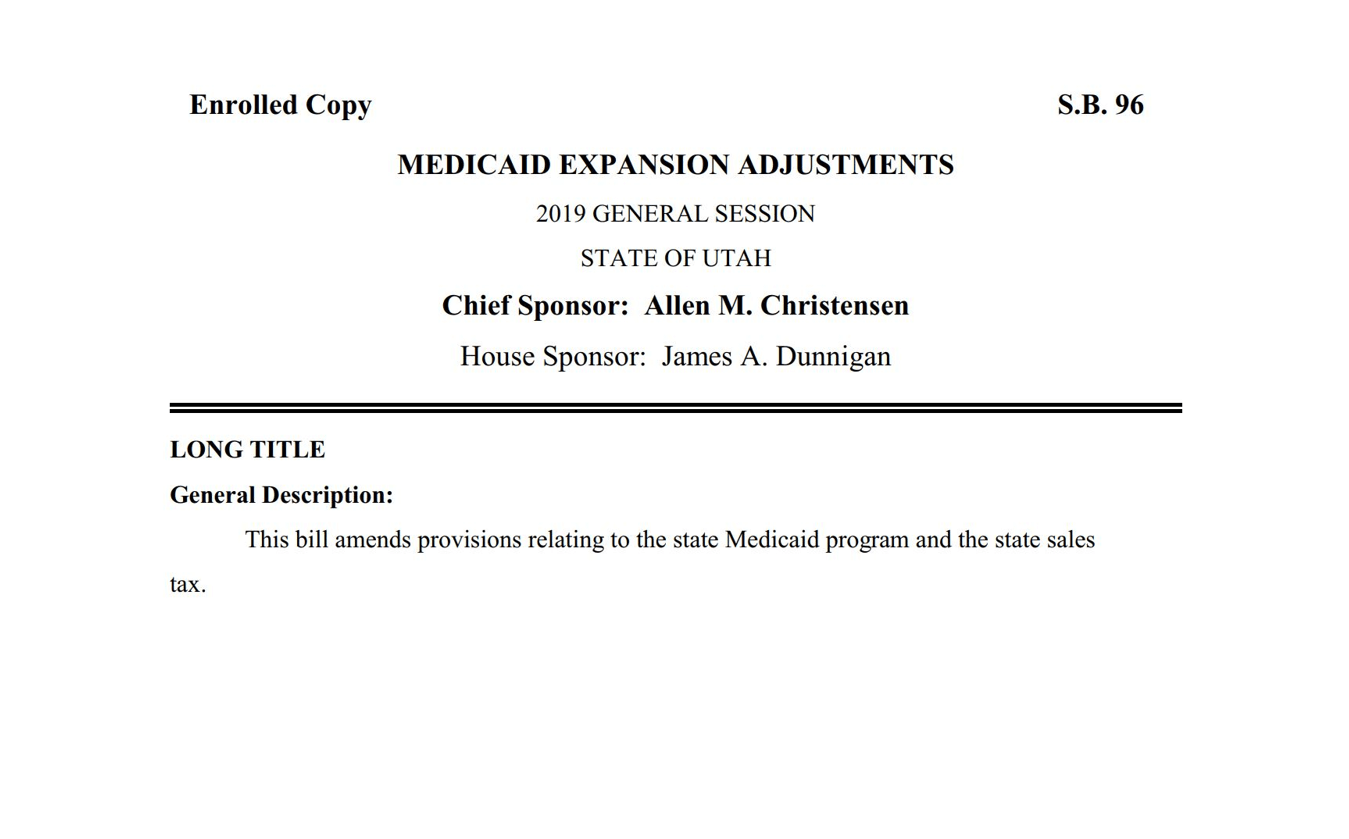 What does SB 96 really say?

Before the federal Affordable Care Act (ACA), states the federal government only required that states provide Medicaid coverage to children, pregnant women, parents of dependent children, individuals with disabilities, and qualifying people over age 65.  States were not required to cover childless, low-income, non-disabled adults, but could choose to do so and could choose their own income guidelines if they did.

Under tradition Medicaid rules the federal government reimbursed state between 50 and 83 percent, with the historic average being around 57 percent. In an effort to ensure health insurance coverage for more of the national population, the ACA incentivizes states to extend Medicaid to otherwise not eligible adults up to 138 percent of the federal poverty level (FPL) by offering a 9 to 1 match or 90 percent Federal Medical Assistance Percentage (FMAP) on state funding for states that choose to expand.

Until recently, Utah had not expanded its Medicaid eligibility. In non-expansion states, individuals between 100 and 138 FPL are eligible to purchase subsidized insurance on the federal health benefit exchange. However, individuals below 100 FPL that do not otherwise qualify for Medicaid often find themselves in a “coverage gap” which is what Prop. 3 and SB 96 both attempt to address albeit in different ways.

Signed into law February 11, 2019, SB 96 is what has been dubbed “partial expansion.” As of April 1, 2019, it expands Utah’s Medicaid eligibility to all individuals up to 100 percent FPL or $12,490 for one and $25,750 for a family of four. Initially, Utah will receive its regular  FMAP, from the federal government, which approximately 70 percent.

Part of the Utah expansion plan depends on the state applying quickly for, and receiving, a new waiver from the Centers for Medicare and Medicaid Services (CMS) that would give the state the full expansion 90 percent FMAP, but for its limited expansion population. Wisconsin is currently the only other state to have attempted a partial waiver to 100 percent FPL and it retained its standard FMAP of 59 percent.

In addition to the limited financial eligibility expansion, SB 96 contains other potentially cost saving features for the state that have proven controversial in other states.  They include:

In addition to covering at least 80,000 additional Utahns, law also includes other beneficial provisions including:

The bill also builds in a “fail safe” in case the state’s unique 100 percent FPL, 90/10 waiver is not approved by CMS. If denied by CMS, the bill would revert to Prop. 3’s original full expansion plan, but would allow the state to seek additional waivers from CMS, reduce agency appropriations to cover costs, and allow amendment of sales tax and hospital assessments to ensure program solvency.