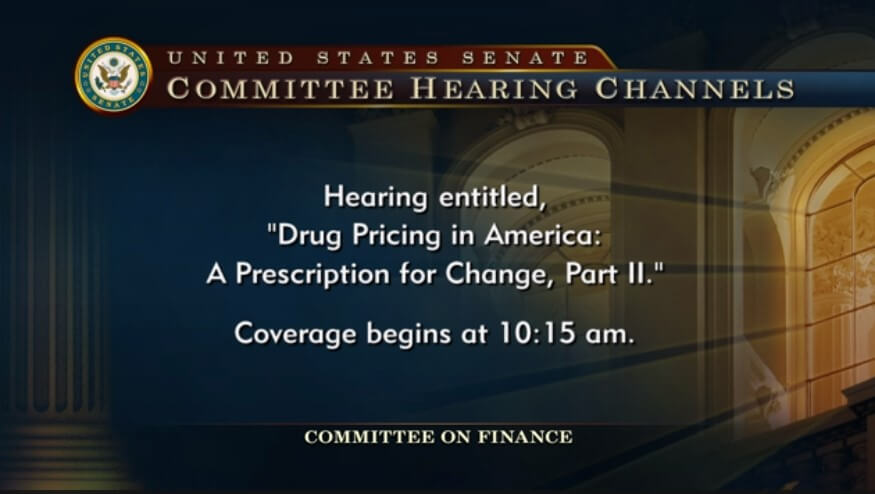 U.S. Senators shined a light on drug pricing this week as the CEOs of Pfizer, Merck, AbbVie, AstraZeneca, and other large pharmaceutical companies appeared before the Senate Finance Committee.  The hearings have been widely covered, and we’ve noticed some emerging themes. We’ve curated a run-down of the best reporting of hearing themes for you here:

There is currently bi-partisan distaste for the pharma industry.

“Outlining the problem, Sen. Ron Wyden of Oregon, the committee’s top Democrat, said that last fall 10 companies accounted for half of all profits in the health care sector, nine of them drugmakers. He pointed out that all but one of the drugmakers represented Tuesday were among the top 10 profit-makers.

‘Your profits are outsized compared to others in the industry, you get a massive portion of your revenue from American taxpayers, and you bear none of the consequences of high drug prices,’ Wyden said.”

“The companies took hits from Republican lawmakers like Texas Sen. John Cornyn, who accused AbbVie of abusing the patent system by obtaining 247 patents to protect its multibillion-dollar arthritis drug Humira from competition for more than 30 years.

‘Is it your company’s position that it should have an exclusive monopoly on that medication for 31 years?’ Cornyn asked AbbVie CEO Richard Gonzalez. ‘I support drug companies recovering a profit … but at some point that patent has to end, that exclusivity has to end.’

The tone was a marked change from past debates, in which drug companies largely avoided blame from Republicans for surging health costs and warned lawmakers against imposing regulations that the industry said would threaten research on cures.”

The CEOs were quick to shift blame for cost increases to PBMs and rebates.

“Though both Democrats and Republicans had repeatedly warned pharmaceutical executives against shifting blame to other players in the supply chain, many of the drug industry executives did so anyway. After retreading arguments about heavy investments in research and development, several CEOs attempted to cast both insurers and pharmacy benefit managers as at least co-equal culprits in the high drug prices Americans have come to view as excessive….

Executives from AbbVie, AstraZeneca, Bristol Myers-Squibb, and Pfizer also expressed support for the Trump administration’s proposed rule to ban rebates drug manufacturers pay to insurers — either hinting at approval or endorsing the proposal directly. Representatives of Johnson & Johnson, Merck, Sanofi also expressed, at length, a desire to reform the rebate system. Each of the seven CEOs, while expressing caution, indicated rebate reform would likely lead to lower list prices.”

And from Kaiser Health News:

“Each of the seven executives said they support eliminating rebates, or discounts negotiated by pharmacy benefit managers that lower the cost of drugs for those footing the bill — generally, insurance companies or larger employers…. Yet, when asked about the Trump administration’s recent proposal to strip PBMs of their ability to claim rebates for brand-name drugs covered by government programs, not a single executive would commit to lowering list prices should the proposal be realized.”

“Sen. Chuck Grassley (R., Iowa) told the executives at the end of the nearly 3 1/2-hour hearing: ‘If you lowered list prices it would help.’ Earlier, he said list prices matter, because some patients pay either full price or a percentage that is based on the list price, rather than on net prices after rebates that manufacturers pay to middlemen.

But Merck CEO Ken Frazier said: ‘No one can unilaterally lower list prices without running into financial and operating disadvantages.’

He and other executives said under the current system, higher list prices actually help them compete with rivals for better insurance coverage, because they result in higher rebates paid to pharmacy-benefit managers and other middlemen. PBMs and insurers determine placements on preferred-drug lists, known as formularies, based on rebate negotiations….

Sanofi CEO Olivier Brandicourt said if the company cut its U.S. list prices, ‘We would lose formulary placement if we were doing that in isolation, especially in very competitive areas.'”

No matter the cause, U.S. consumers are the losers.

The Atlantic highlights the plight of consumers:

“In response to a question from Senator Steve Daines of Montana, Kenneth Frazier, from Merck, admitted that patients with no insurance are sometimes the ones who pay the list price. ‘The people who can least afford it are paying the most,’ Frazier said. ‘The list prices work against the patient.’ Merck blames this on the rebates they pay to PBMs and insurers, so it’s not exactly an admission that they’ve raised prices too high. But it does seem to acknowledge a problem with the system.”

And the L.A. Times reports:

“Perhaps the most enlightening moment in over three hours of testimony came when Sen. Ron Wyden (D-Ore.) asked AbbVie CEO Richard Gonzalez if the company makes a profit in countries that limit how much can be charged for drugs, such as France or Germany.

Gonzalez answered that, yes, his company still earns a profit amid price controls. He insisted, however, that this was only possible because Americans pay ‘some of the highest prices in the world,’ thus covering the lion’s share of R&D costs.”

You can find the full hearing recording and materials here.