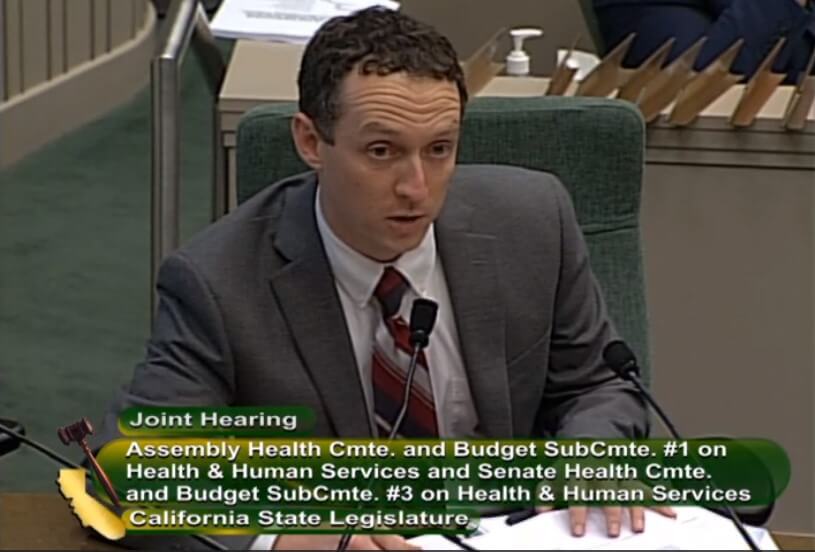 Asm. Jim Wood, Chair of the Assembly Committee on Health, kicked off the hearing by explaining,

Ms. Lucia also offered a real life example of cost in relation to what is called the “400 percent cliff”, the point at which exchange tax subsidies end. She told of a Married couple living in San Mateo, and earning $74,070 annually or roughly 450 percent FPL, just a little too much for ACA subsidies. They would pay $1,362 per month total for the lowest cost Bronze plan offered or 22% of their income just in premiums. In addition, they pay full cost for any health care costs beyond first three outpatient visits under the plan’s $6,300 deductible.

Senator Richard Pan questioned: Where should we draw the line with regard to subsidies and at what point do we say, you are expected to pay X amount for health care?

“It’s hard to tell, but as long as we are seeing a high number of uninsured and the reason people are giving is that they can’t afford it, we still have an affordability problem. And as long as we see that people are reporting to surveys that they are not accessing the care they need because the out-of-pocket costs are too high, I think it’s an indicator that we still have a problem.”

The Committees moved on to consider policy options to address affordability from Covered California that were developed pursuant to last year’s budget bill. The policies aim to address the following objectives:

The first option was what Lee called the “Comprehensive All-in Strategy,” which involves layering a mix of all the tools together – enhancing and extending premium and cost-sharing support plus individual mandate penalty plus reinsurance. 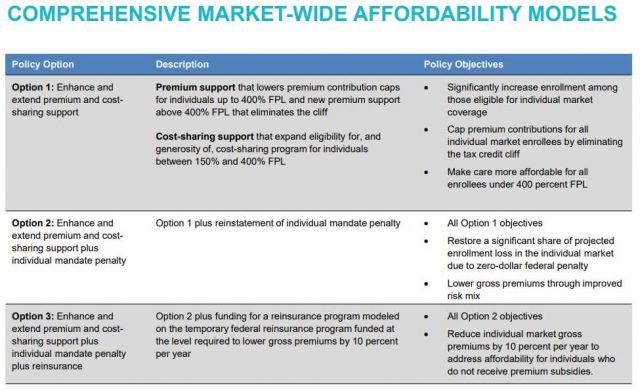 The second option was what he called “a mix of eight distinct policy options” outlined in the chart below, from which he explained policy makers could pick and choose depending on the objectives targeted. 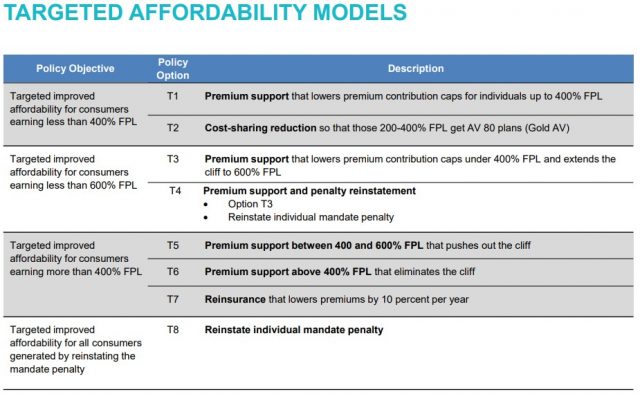 The option Lee highlighted that he stated would have by far the biggest effect on enrollment?  Reinstating the individual mandate penalty.

The joint Committees also heard the Governor’s proposal: Reinstatement of the individual mandate at the state level beginning in 2020, with penalty revenue dedicated to providing subsidies under Covered California for those between 250 and 600 percent FPL.

Ryan Woolsey, the Principal Fiscal and Policy Analyst, of the Legislative Analyst’s Office provided an overview of the LAO’s analysis of the policy options and possibilities for funding.

The LAO’s take: The individual mandate may be one of the most effective tools that the state has to influence enrollment on the individual market, but it comes with trade-offs, which include generating revenues for the state at the expensive of people that would not have purchased coverage because they find it unaffordable.

Other suggested funding options to increase affordability for consideration: