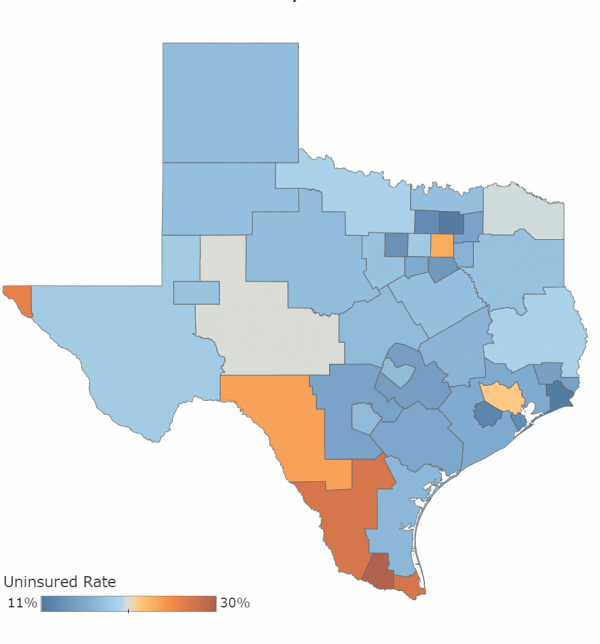 New report: Texas has highest rate of uninsured people in the nation

“The number of insured people in the US has increased significantly since implementation of the Affordable Care Act’s (ACA’s) coverage reforms in 2014. Since that time, the number of people insured nationally has increased by approximately 19 million (Skopec, Holahan, and Elmendorf 2018). However, the increase in coverage has occurred unevenly across the states, with states that have chosen to expand Medicaid eligibility under the law experiencing the largest increases in coverage.”

The report details characteristics of the uninsured population statewide, as well as by areas based on population and by county (sometimes “groups of less populous counties”).

Among several statewide findings, the report writers found that:

“Although citizenship is strongly correlated with insurance coverage, as is Hispanic ethnicity …” according to the report, “many of the uninsured Hispanic residents of the state are citizens … Over 40 percent of uninsured Hispanic Texans are US citizens (1.2 million people).”

The report’s locality-based analysis gives more nuanced findings. Areas with the highest rates of uninsured people were within major cities and the state’s southern tip. 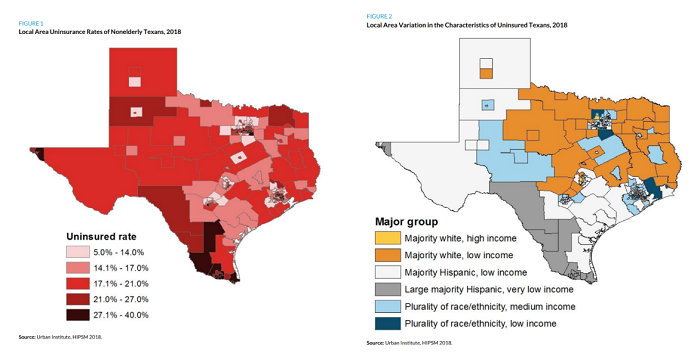 An example of differentiation across localities highlighted in the report concerns the race and ethnicity of uninsured people in different counties.

The variety across Texas is central to the report’s discussion around policy strategies to address the state’s notably high rates of uninsurance. The report writers posit several points for policy discussion, including Medicaid expansion. If Texas were to expand Medicaid eligibility to adults with incomes 138 percent of the Federal Poverty Level (about $35,000 for a family of four),  the report says “1.2 million uninsured people currently ineligible for assistance would gain Medicaid eligibility,” with majority-white, low-income localities gaining the most from such an expansion (given current law that legal immigrant noncitizens wouldn’t be eligible).

Other points include: advice to cater outreach for an audience with limited education and a warning that, if the recently proposed federal public charge rule were put into effect, it could “exacerbate the uninsurance rate among both citizens and noncitizens in mixed-citizenship families.”

An interactive map and fact sheets that detail the characteristics of uninsured people in the state by county can be accessed here.