As Covered California’s open-enrollment period prepares to start in the fall, a new report from the U.S. Census Bureau shows that California continues to make historic gains in the effort to reduce the state’s uninsured rate. According to the data released on Wednesday, California’s uninsured rate fell to a new historic low of 7.2 percent in 2017, which represents a decline of 10 percentage points from the pre-Affordable Care Act rate of 17.2 percent.

“The Census figures are the gold standard and what the numbers show is that California continues to make history in reducing the rate of the uninsured,” said Covered California Executive Director Peter V. Lee. “Californians are joining the millions of Americans across the nation who continue to benefit from the coverage expansion made possible by the Affordable Care Act.”

California’s drop in the uninsured rate from 17.2 percent in 2013 to 7.2 percent, a decrease of 10 points, is the largest decrease of any state in the nation over that time period.

In addition, the report showed that 3.7 million Californians have gained health insurance coverage since 2013, which is a greater number than the next three states — Florida, New York and Texas — combined.

“California embraced the Affordable Care Act by expanding Medi-Cal and creating a competitive marketplace in Covered California that puts consumers first,” Lee said. “We know that life can change in an instant, and now millions of Californians and their families are protected and have access to the best medical care in the state.”

Lee noted that the Census report shows that Americans across the country continue to benefit from the Affordable Care Act despite continued uncertainty and turmoil at the federal level. Overall the national uninsured rate remained statistically unchanged at 8.8 percent. The report highlighted California and two other states, Louisiana and New York, as states that saw a reduction in their uninsured rate in 2017, while 34 other states had uninsured rates that remained unchanged. 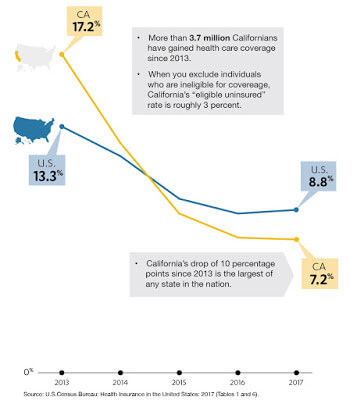 A recent study shows there are an estimated 3 million Californians who remain without comprehensive health care coverage. Of those that remain uninsured, an estimated 59 percent are not eligible to enroll in health care coverage due to their immigration status. When you exclude those that are ineligible for coverage, California’s “eligible uninsured” rate drops to roughly 3 percent.

“We are getting to a point where we are nearing universal coverage in California for those who are eligible, but we cannot rest on our laurels,” Lee said. “In the coming open-enrollment period, we will again be crisscrossing the state, making sure that Californians know about their health care options and the financial help that is available to bring quality coverage within reach.”

Interested consumers should go to www.CoveredCA.com to find out if they qualify for financial help and find free local help to enroll. They can contact the Covered California service center for enrollment assistance by calling (800) 300-1506. Qualified consumers can enroll in Medi-Cal year round.

The full Census report can be viewed here: https://www.census.gov/content/dam/Census/library/publications/2018/demo/p60-264.pdf.

Covered California is an independent part of the state government whose job is to make the health insurance marketplace work for California’s consumers. It is overseen by a five-member board appointed by the governor and the Legislature. For more information about Covered California, please visit www.CoveredCA.com.

This press release is provided by Covered California