SACRAMENTO, Calif. — A new analysis shows that California continues to benefit from attracting a healthy mix of enrollees to its individual insurance market through significant investments made by Covered California in marketing and outreach. These investments have resulted in more-stable rates and enrollment. The health of California’s consumers is a critical element of the state’s overall stability and will play a significant role in informing Covered California’s rate negotiations for 2019, which determine the prices consumers will pay regardless of their receiving subsidies.

“A healthy pool of consumers is the foundation of the stability of California’s individual insurance market because healthier consumers mean lower premiums for everyone, which helps promote more enrollment,” said Peter V. Lee, executive director of Covered California. “From the start, Covered California has focused on enrolling a healthy mix of consumers, and this analysis provides new evidence that investing in promoting enrollment is essential and pays off in the form of reduced premiums for those who do not receive subsidies.”

“A healthy and stable individual market is one that works for both subsidized and unsubsidized consumers,” Lee said. “In California, we have seen remarkable stability in the number of unsubsidized consumers in the individual market since 2015, while the rest of the nation has seen a one-year drop of 20 percent in coverage for consumers who do not receive any financial help. This decline in coverage translates to 1.3 million Americans being unnecessarily priced out of coverage.” (See Table 1.) 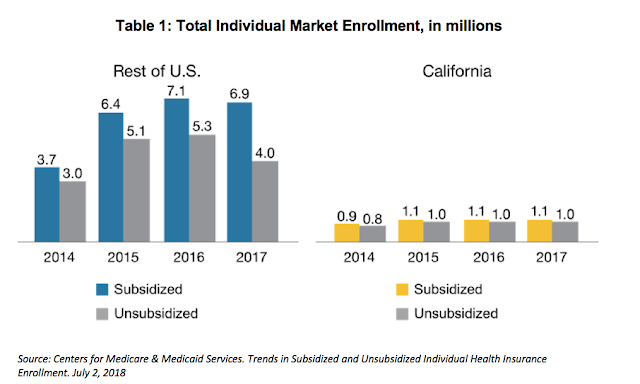 The study pointed to four key reasons why California has been successful in attracting and retaining a healthier mix of consumers:

Lee noted that for states supported by the federally facilitated marketplace, the higher risk scores and decrease in enrollment are likely to get worse with the federal administration’s decision to underinvest in marketing, which was reinforced with the recent cutback in outreach funding for the federal Navigator program.

“Enrolling and keeping consumers in health care coverage is an ongoing process that takes ongoing investments. Marketing and outreach are critical to informing the public about their options and educating them about the value of coverage,” Lee said. “When you pull back on these elements, you will see fewer healthy consumers enrolling, which will lead to higher premiums for unsubsidized consumers in those markets.”

An estimated 13 million people are enrolled in the individual market across the country. Of those, approximately 5 million do not receive any financial help. A Covered California analysis found that most unsubsidized consumers are not high-income earners and have a median annual income of $75,000 (see Table 2). 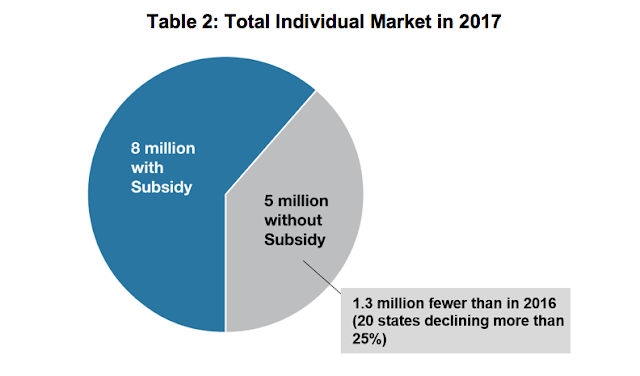