Who can explain the state of behavioral health in Oregon?

Behavioral health has been under scrutiny in Oregon in recent years for under-funding and mismanagement. In late 2010, the US Department of Justice began investigating Oregon’s mental health system and in 2014 its report found that the state needed to reform the system to better integrate treatment for people with Serious and Persistent Mental Illness (SPMI) and better integrate mental health into the larger health system. The state has take steps to address these issues through the Oregon Performance Plan, developing a blueprint for integration including performance measures monitored by the DOJ, and by forming the Behavioral Health Collaborative (BHC) to recommend strategies for further integration of behavioral, physical, and oral health. Despite these efforts, Mental Health America, one of the nation’s largest mental health non-profits, recently ranked Oregon 44th overall in mental health treatment.

Recently, we talked to Patrick Allen, the Director of the Oregon Health Authority, and asked him about the state of behavioral health in Oregon. He explained that the answer is complicated due to the structure of the system and funding of behavioral health.

“I have been trying to build a map of where do dollars go and how many of them there are doing exactly what. I have been really struck by how incredibly complex that process [funding behavioral health] is. I still don’t really have a good idea of how the funds flow.”

In an effort to help answer this question, we dug into this structure to see if we could understand it any better than the Director. We scoured the budget. We spent hours researching. Here are four things we learned after spending way to much time looking for answers.

In 2016, OHA reorganized its treatment of behavioral health and folded the former Addictions and Mental Health Division into different parts of the Health Systems Division (HSD), Health Policy Division, and Public Health in an effort to more fully integrate behavioral health. While this was in keeping with the objectives of the Oregon Performance Plan, but Director Allen said this had negative consequences in the agency.

“The problem is that it made behavioral health disappear in the agency.”

BH went from clear budget funding of $1.172 billion to some part of a $14.54 billion dollar budget, with little accountability as to how these allocations remain protected or are administered. Some of the money flows to Coordinated Care Organizations (CCOs), but how individual CCOs manage behavioral health varies widely, from fully integrated behavioral health providers to 100% fee for service billing. Some of this money also continues to flow to Community Mental Health Programs (CMHPs) and Local Mental Health Authorities (LMHAs) that have existing structures and relationships in the community and often provide safety net services. 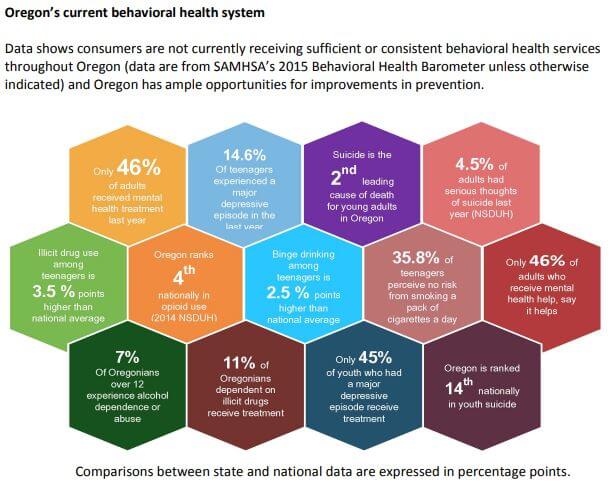 In the meantime, OHA also received to Substance Abuse and Mental Health Services Administration grant to pilot a two-year demonstration of Certified Community Behavioral Health Clinics (CCBHCs) in 2017-2019. These CCBHCs are tasked with directly providing (or contracting with partner organizations to provide) nine types of behavioral health services, with an emphasis on the provision of 24-hour crisis care, utilization of evidence-based practices, care coordination, and integration with physical health care for Medicaid populations. Interestingly, these clinics and partners do not operate within the CCO structure of integration that OHA has been working to promote, but rather are working to coordinate behavioral health care within their own existing networks.

So what is status of behavioral health in Oregon?

Because of the current budget structure, it is impossible to tell the total amount that is spent on behavioral health or where it goes. Some insight can be gleaned from mid-term budget reconciliations, which separate out programs for funding adjustments. Most recently, in March 2018 HB 5201 provided close to $5 million in mental health funding for schools, residential treatment centers, and a psychiatric crisis line, but the individual budget amounts are still folded into the large Health Systems Division budget.

April 30, 2018, Director Allen announced yet another OHA structural realignment effective July 1, 2018, that plans to tease behavioral health programs out from their current various homes in HSD, Analytics, and Public Health back under one roof.

“The idea will be to return visibility to the program… And I will have a Director of Behavioral Health that I’ll be able to hold accountable.”

Despite attempts at integration, behavioral health in Oregon looks much the same as mental health treatment systems of the past, fragmented, fractured, and at many times bewildering to the patients and families that need the system’s help the most.