Today is Primary Election Day in California where the state’s top two primary system has created interesting politics in a deeply blue state.

If you haven’t followed the race closely, it’s been notable for a number of reasons.  And, those might well have implications for other states and perhaps the rest of the country as the 2020 General Election looms on our national horizon.

Here are three interesting story lines that have emerged from the California gubernatorial primary that may well have implications for the future of our politics in other states and in the country as a whole.

Health care is the primary differentiator among Democratic primary voters

I don’t think this can be overstated.  The most important lesson from California’s gubernatorial primary among Democrats is this:  you must support a “single payer” health care proposal if you want to elevate yourself in a crowded Democratic field.

That was the approach Gavin Newsom took, and it paid off.  While he has been a long time figure among progressives in California politics, and is the sitting Lt. Governor, it was not clear twelve months ago that Newsom was going to become such a strong candidate in this race.

The position that propelled him forward was an unequivocal statement of support for a single payer health care policy.  That moved him well ahead of the pack, while each of the other major Democratic candidates – Villaraigosa and Chiang – muddled through incrementalism.

Now, truth be told, the idea of “single payer” means a lot of different things to different people in California.  For many, it means accessible, low cost, administratively simple health care services paid for by the state through tax dollars in a system where every resident is covered by a minimum defined benefit.  It’s the same sort of minimum defined benefit we have for education:  you get free education through 12th grade where you will be educated on many things, but not all.  And if you need help outside of that system, or beyond it into college, you’re going to have to foot part or all of that bill.

Whatever single payer might look like in the heads of California primary voters, it is clear based on polls and likely tomorrow’s results:  a platform of single payer health care is a winner if you want to succeed as a Democratic candidate.  Without it, you might as well run as an independent.

The impact of #metoo, or lack thereof

Remember how we live in the time of #metoo?  Remember how that movement started in Hollywood?

In California, bastion of progressivity in America, the top contenders for governor are all men.  Not a single woman has run a campaign that has been elevated to a top tier candidacy.  Neither Delaine Eastin nor Amanda Renteria have polled in the race above 5%. 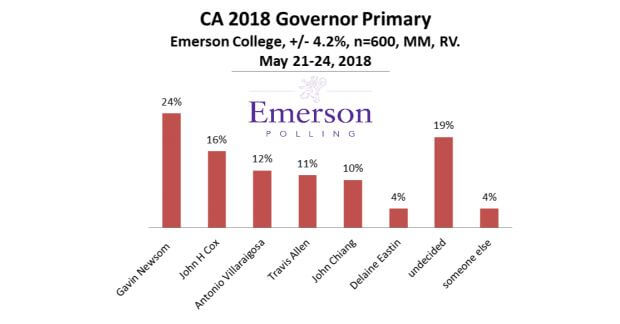 Yet, two of the leading candidates have open histories of sexual affairs that might have fit well into the narrative of the #metoo era.

Gavin Newsom had an affair with his appointment secretary in 2007.  She then quit his office while he was mayor of San Francisco.  A few months ago, she said the affair fit within the #metoo movement, something she supports, but that the affair shouldn’t be a disqualifier in the governor’s race. From the LA Times story.

Ruby Rippey Gibney said that although their relationship destroyed her home life, it probably shouldn’t be part of the discussion about sexual misconduct surrounding the #MeToo movement.

Antonio Villaraigosa had an affair with a Telemundo reporter that covered his administration, which also came to light in 2007.  That was an example of an elected official in a capacity to provide or withhold access to a reporter.

Both of these affairs had elements of power and control associated with them, which is a central component of the #metoo movement: pushing back against sexual advances from men in a position of power or influence over women.

Yet neither issue came up in a meaningful way during the campaign. Perhaps both candidates were unwilling to address the issue for fear it would also tarnish themselves, making a strategic decision rather than a decision out of politeness. California Democratic politics isn’t a bastion of politeness, after all.

But, that no other candidate raised the issue substantively – particularly during the primary and the era of #metoo – is a noteworthy matter.

Perhaps for all of the meaningful discussion about gender roles, power, and sexual advances in America’s workplace, the topic has become less compelling in 2018 politics.  If that’s the case, it has tremendous implications for other states and our 2020 General Election with a candidate like Donald Trump on the ballot.

Regardless of the primary, California is going to show us what a single payer system looks like

Regardless of who wins the gubernatorial contest this fall, it’s clear the legislature is going to pursue a single payer policy discussion.  And, with a anti-Trump “blue wave” likely forming among legislative candidates in California, it’s altogether possible that an overwhelming supermajority of legislators will arrive in Sacramento in 2019 with the votes to implement any tax or revenue model needed to implement a single payer system.

Now, sure, that assumes a great deal: electoral victories, the composition of the next Democratic caucuses, an openness from Speaker Anthony Rendon to yield on the issue where he has not previously.

Regardless of the specific details, it’s clear there will be significant energy put forward on the topic among the legislative and advocacy community.  If a single payer advocate wins the Governor’s Mansion, then a suite of administrative staff will also be hired and focused on the policy topic.

That is all to say that in 2019, California will be spending significant intellectual capital to build a single payer policy model that can be operationalized and financed, moving from the theoretical to the actual, all while the next presidential election will be taking shape.

If the largest state in the Union is actively building a single payer model, that will infuse the discussion on the left with content, ideas, and actual proposals that will likely take hold during the process to determine the Democratic nominee for President.