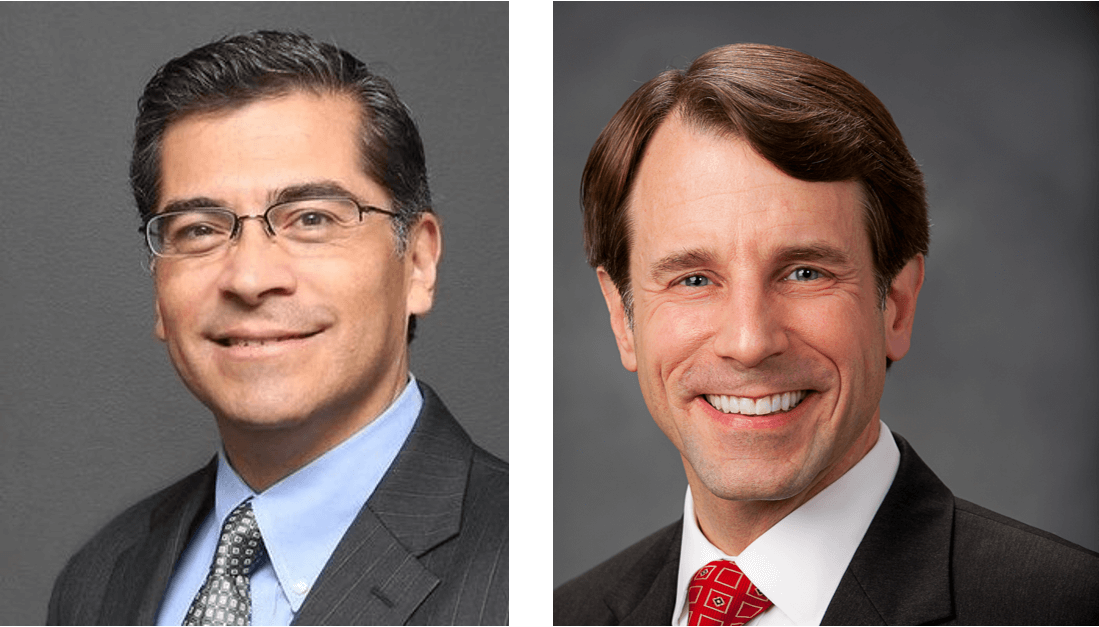 A look at CA Attorney General candidates Becerra and Jones

California State Attorney General Xavier Becerra and Insurance Commissioner Dave Jones have both made their successes in healthcare part of their platforms in the current race for Attorney General.

We look back at our coverage of the two candidates over the years in their current roles to see what healthcare trends they’ve paid attention to.

Attorney General Xavier Becerra was appointed to the office in 2017 following Kalama Harris’s election to the US Senate. He served one term in the California State Assembly before being elected to the US House of Representatives in 1993, where he served 12 terms.

AG Becerra has received national attention for his 35 lawsuits filed against the Trump Administration. In these lawsuits, he’s worked to protect health care subsidies, CSR payments, and access to contraceptives under the ACA. In a profile piece published in VICE, Becerra reiterated his position:

“We’re going to do everything we can to defend California’s values. These days, it also means protecting those values against attacks from wherever they may come, including Washington, DC.”

Becerra has also fought to protect the ACA, intervening in a federal lawsuit that involves one coalition of 20 state AGs, another coalition of 17 state AGs, and the federal government. The lawsuit, led by Texas and Wisconsin AGs, seeks to repeal the ACA.

“Sutter Health is throwing its weight around in the healthcare market, engaging in illegal, anti-competitive pricing that hurts California families,” said Attorney General Becerra. “These tactics are risking Californians’ lives by driving up the cost of healthcare for everyone. Big business should not be able to throttle competition at the expense of patients. The California Department of Justice is dedicated to ensuring that all families in our state can access quality, affordable healthcare no matter where they live.”

However, AG Becerra is not anti-merger; he approved of a merger between St. Joseph Health and Washington-based Providence Health & Services in 2016 with several conditions, including a three-year $30 million mental health initiative.

Dave Jones was first elected Insurance Commissioner in 2010 after serving in the California State Assembly for six years. During his time in the legislature, he chair the Assembly Health Committee, Assembly Judiciary Committee, and the Budget Subcommittee on Health and Human Services.

Commissioner Jones has been more focused on issues at the state level, but did play on the national state with his opposition to the Anthem-Cigna merger.

In 2015, Commissioner Jones raised concerns over Anthem Blue Cross’s merger with Cigna. In 2016, he asked the US Department of Justice to block the merger. Jones argued that the merger would reduce competition in 41 of California’s 58 counties and harm the insurance market, state businesses’ and Californians. Jones also wanted the expected $2 billion in savings to be passed on to consumers through lower premiums.

“When it comes to the Anthem and Cigna merger, bigger is not better for California’s consumers or the health insurance market. Anthem and Cigna failed to provide details to support their claim of $2 billion in savings and they refused to guarantee consumers and businesses will see the benefit of any potential savings in reduced prices,” Jones said.

Commissioner Jones has been a critic of Republican-led health reform at the federal level. He opposed the Graham-Cassidy bill and criticized President Trump’s executive order allowing the sale of health insurance across state lines and increasing the time limit for short-term plans.

When it comes to consumer protections, Commissioner Jones has argued for mental health parity and worked to ensure provider network adequacy.

Commissioner Jones sat down with State of Reform back in 2015 for an interview on the challenges California faced in health care reform, including what he called “excessive rate increases.” He also joined us as one of our keynote speakers at the 2016 Southern California State of Reform Health Policy Conference, where he talked about the possibility of adding a public option in California.

You can watch his remarks here.