Overall, Alaska ranks 34rd in the nation. Alaska also ranks below the national average in the five main categories, with the exception of Avoidable Hospital Use and Cost where Alaska is ranked 10th. 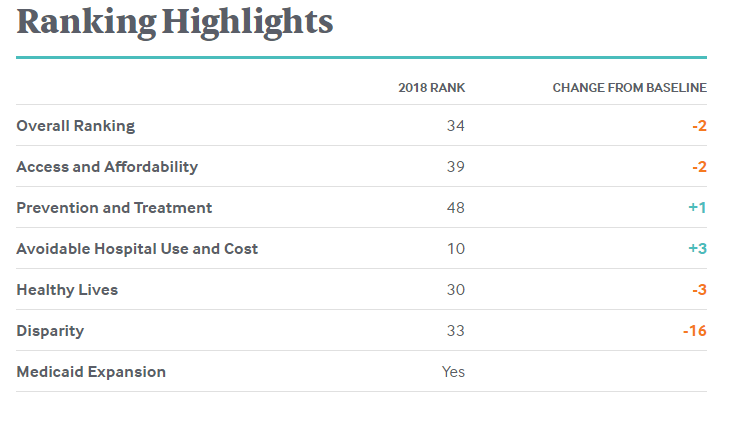 Alaska worsened the most in Disparity, and also saw worsened performance in Healthy Lives and Access & Affordability.

Alaska ranks the worst or near the worst in the nation for several disparity indicators. The Commonwealth Fund defined disparity as the difference between the state’s low-income (under 200% of federal poverty level) and higher-income populations (over 400% of the federal poverty level). Alaska ranks worst in the nation for adults who smoke and for potentially avoidable emergency department visits for Medicare dual eligible beneficiaries age 65 and older. The state also has low scores for uninsured children, adults and children without all recommended vaccines, and children without both a medical and dental preventive care visit in the past year.

However, Alaska does have high rankings and has seen significant improvement in some areas.

The state had its rate worsen for: