Oregon has significant improvements, some worsening in healthy system performance

Oregon ranks 11th overall in the nation, a significant improvement from recent years. Oregon also made improvements in Access & Affordability and Health Disparity, but saw a slight decrease in its rank in Avoidable Use & Cost and Healthy Lives despite high scores in these categories. 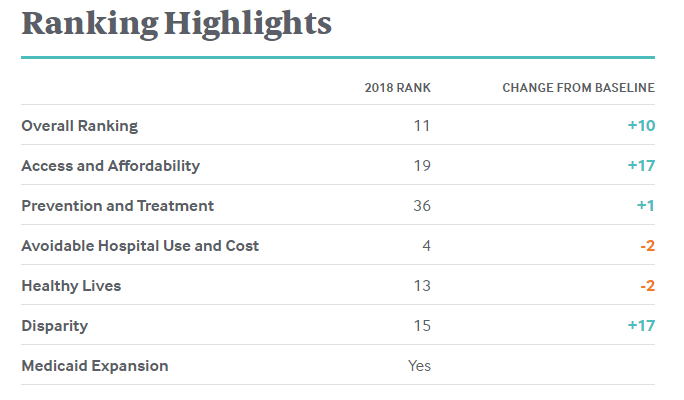 Oregon saw its rate of children ages 19-35 months who did not receive all recommended vaccines worsen; Oregon is also ranked last in the nation for this indicator. The hospital 30-day mortality rate also worsened and Oregon is ranked 44th nationally.

The state’s results are more mixed for disparity. Out of 19 indicators, only 10 were rated as improved. Two had no baseline data to compare to, four worsened and three saw no significant change. The Commonwealth Fund defined disparity as the difference between the state’s low-income (under 200% of federal poverty level) and higher-income populations (over 400% of the federal poverty level).

All of the indicators for Avoidable Hospital Use & Cost either has no significant change, worsened, or had no baseline data to compare to. However, Oregon scored in the top quartile for all of these indictors except for total employer-sponsored insurance spending per enrollee where the state falls below the national average.

Only one indicator for Healthy Lives improved: the colorectal cancer death rate. Six other indicators saw no change and one had no baseline data to compare to. The rate of adults who are obese and the breast cancer death rate both worsened.