The National Center for Health Statistics has released new drug overdose death counts. The data from June 2016 to July 2017 shows that while the nation saw a 14.4 percent increase in overdose deaths, 14 states saw decreases during the twelve-month reporting period.

The majority of the states with decreases are located in the West. Wyoming saw the largest decrease of 39.4 percent. Washington, Utah, and Alaska all saw decreases of more than 10 percent. Hawaii, California, Oregon, and Arizona also had decreases.

The only two Southeast states with decreases were Mississippi and Tennessee. 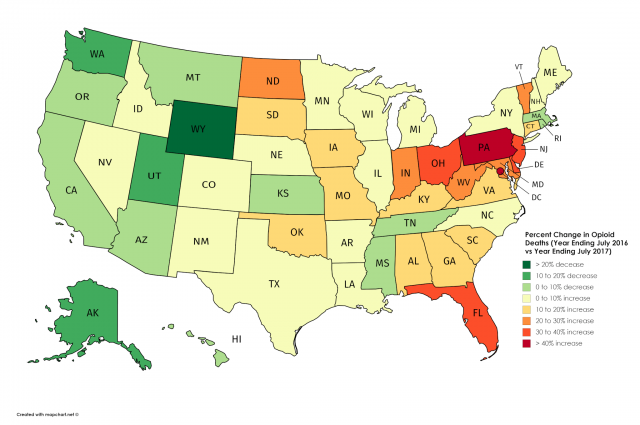 However, the decreases in some parts of the country indicate that policies that have been introduced to reduce drug overdoses, especially those caused from prescription opioids, may be working.

In Alaska, which had an 11.2 percent decrease, Governor Bill Walker has made addressing the rates of heroin and opioid abuse one of his priorities through his administration’s Safer Alaska. Gov. Walker has also signed legislation to impose regulations on prescribing opioids that was introduced at his request last year.

Both Arizona and Alaska have both declared an emergency over the drug crisis along with Virginia, Massachusetts, Maryland, and Florida.