Covered California announced Wednesday that more than 50,000 new consumers selected a plan during the final three days of open enrollment, bringing its overall total to 423,484 plan selections, which represents a 3 percent increase over last year.

“With robust marketing and strong partnerships in communities across California, we attracted more people to Covered California to newly enroll in health insurance this year,” said Peter V. Lee, executive director of Covered California. “Another key factor was that those getting subsidies actually had more money to shop with due to the work-around we implemented to make sure the cost-sharing reduction benefit was funded.  With this increased support, we saw new and renewing consumers make smart choices, with many more opting for Gold-tier plans this year compared to last.”

Among those who receive financial assistance, 15 percent of new consumers selected a Gold plan during open enrollment, over three times as many as the 4 percent that selected a Gold plan last year. Covered California’s Gold plans generally have higher premiums but pay 80 percent of consumers’ health care costs when they access care. Gold plans were a better value for consumers this year because the premium was lower due to the cost-sharing reduction surcharge that was added only to Silver plans.

“If price were the only thing that mattered, consumers would have largely moved to Bronze-level plans, which have the lowest price,” Lee said. “But instead we saw a ‘gold rush’ of smart shopping in 2018, with consumers buying a richer benefit with their increased subsidy dollars.”

The number of new consumers selecting Platinum plans increased from 2 percent to 4 percent, while the number of consumers selecting a Bronze plan increased from 29 percent to 31 percent. Consequently, the number of new consumers selecting a Silver plan dropped from 63 percent last year to 49 percent this year. The cost-sharing reduction “work-around” was designed to protect the hundreds of thousands of Californians who do not receive federal subsidies. One of the impacts of the cost-sharing reduction work-around was that Covered California encouraged unsubsidized enrollees who had bought Silver plans in 2017 to consider getting the comparable product off-exchange for 2018 and avoid paying the cost-sharing reduction surcharge. “While we’re still analyzing the data, it’s clear that some of the decrease in our renewals was due to consumers moving off-exchange to get coverage,” said Lee. “This fact underscores that our reports only tell part of the story of the individual market in California.”

Lee also offered observations Wednesday about enrollment in the federal insurance marketplace and other state-based exchanges.

“We are seeing remarkable stability in exchanges across the nation. While the federally facilitated marketplace has seen a decline of over 10 percent since 2016, states like California that are served by state-based marketplaces have on average grown by 1.5 percent in the same period,” Lee said. “Dropping enrollment in states that rely on the federal government for marketing and outreach will directly translate to higher premiums due to the worse risk mix. With the potential dramatic rate increases likely in many states, those states that don’t have state-based marketing efforts are at risk of seeing spiraling costs for the unsubsidized, which will likely price millions out of the ability to afford insurance.”

Lee’s comments coincide with new data compiled by the National Academy for State Health Policy that shows that state-based marketplaces’ enrollment outpaced that of the federally facilitated marketplace.

“We know that enrollment in the federal health exchange has been hampered by dramatic cuts in marketing and funding for Navigators to help people enroll,” Lee said. “Our preliminary analysis suggests there has been a dramatic drop in new enrollments in the last two years, meaning the federal exchange is not ‘refilling the bucket’ with new enrollees even though their renewals are holding steady.” 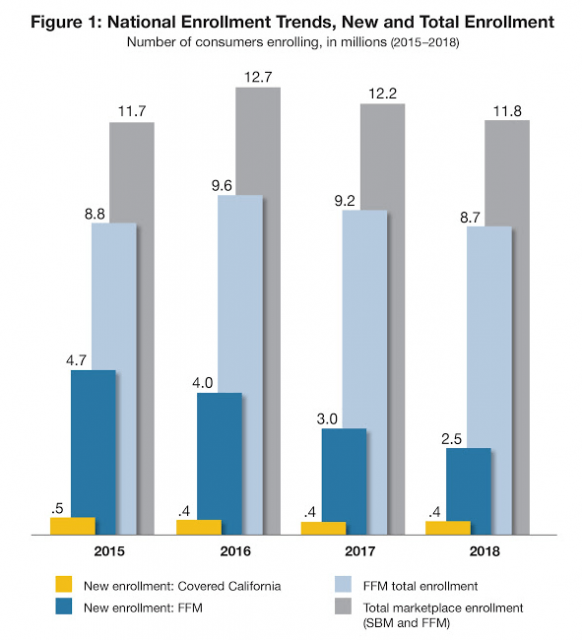 “The problem,” Lee noted, “is that new enrollees refresh the risk mix and help keep rates down. Failing to ‘refill the bucket’ at the top — coupled with the rate increases due to ending the individual mandate — means that enrollment in the federal marketplace, and the individual market more broadly, is headed for trouble next year unless action is taken soon.”

Covered California also released analysis of the premium changes for both subsidized and unsubsidized consumers over the past four years. 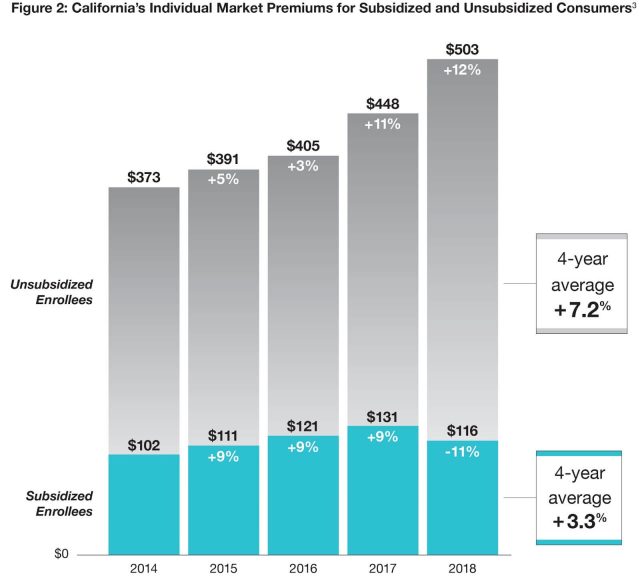 That data confirmed how the financial subsidies are bringing health care within reach to the 85 percent of Covered California enrollees who receive subsidies — with their cost of coverage dropping 11 percent in 2018, reflecting an average monthly cost of $116.

At the same time, the data finds that for unsubsidized consumers — buying either through Covered California or directly from the same carriers in the individual market —premiums increased at an average annual rate of 7.2 percent.

“An average monthly premium of $503 can be tough for those not getting subsidies,” said Lee. “However, over the past four years we’ve kept premium increases to about 7 percent. Our efforts to enroll a healthy pool of enrollees are paying off in lower increases for those who pay the full premium.”

On Jan. 18, Covered California released a report, “The Roller Coaster for Consumers Continues: The Prospect for Individual Health Insurance Markets Nationally for 2019: Risk Factors, Uncertainty and Potential Benefits of Stabilizing Policies,” which estimates that potential premium impacts for 2019 would likely vary greatly state by state, but could be as high as 30 percent in some states.

“Those who do not get help to buy health insurance — an estimated 6 million people across the country — will not have any protection against those rate increases,” Lee said. “The unsubsidized are too often forgotten, and we know that most are middle class Americans with a median income of $75,000. Many will be priced out of coverage if premium hikes are not held in check.”

Earlier this year Covered California released a study that found the enrollment drop in 2018 nationally could have been even greater if not for a dramatic increase in the news coverage of the enrollment periods and deadlines. Ogilvy, a global leader in communications and media, was commissioned to examine coverage trends for the 2017 and 2018 open-enrollment periods across the country. The report found that mentions of “enrollment,” “enrollment period” and “deadline” increased by 53 percent, 125 percent and 129 percent respectively year over year. 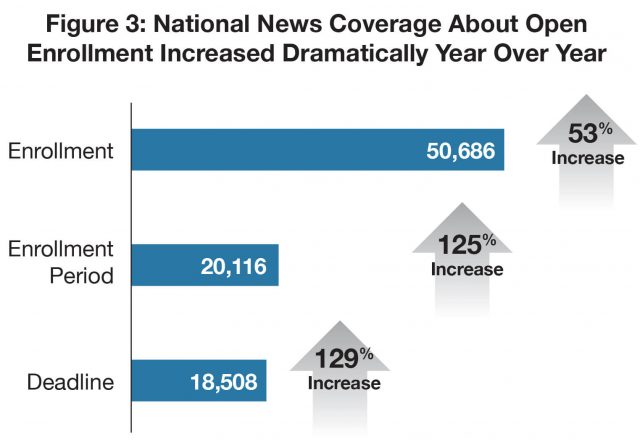 In the absence of federal or state policy changes, rate increases in California in 2019 are likely to be steep but on the “low end” of the range for states nationally due to the starting relatively healthy risk mix and Covered California’s commitment to maintaining a robust marketing campaign to attract and retain a healthy consumer pool that reduces premiums for everyone.

Lee said federal action to stabilize the individual market could make a big difference for millions of unsubsidized consumers who otherwise will face large rate increases.

Since 2014, more than 3.4 million people have purchased health insurance through Covered California, and nearly 4 million have enrolled in the state’s Medi-Cal program. Together, the gains have cut the rate of the uninsured in California from 17 percent in 2013 to a historic low of 6.8 percent as of June 2017. 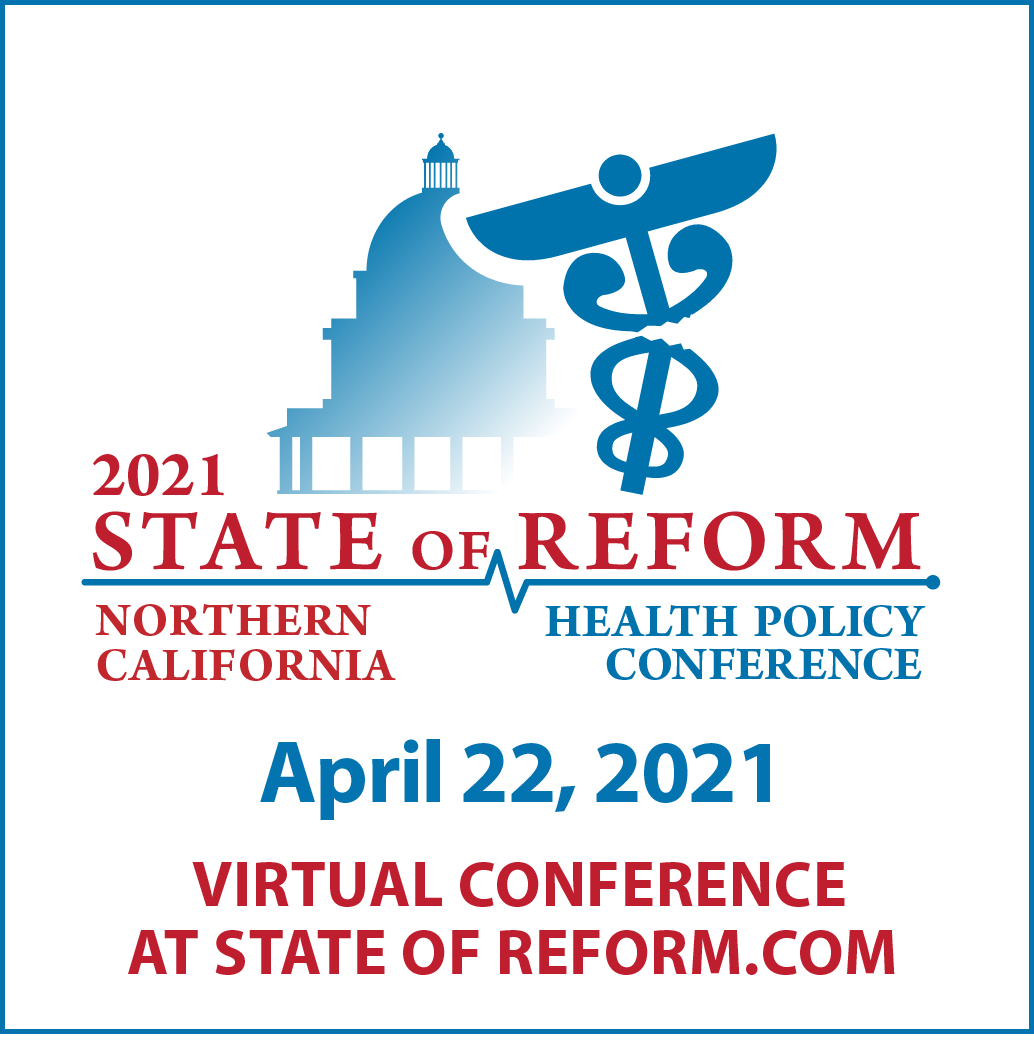