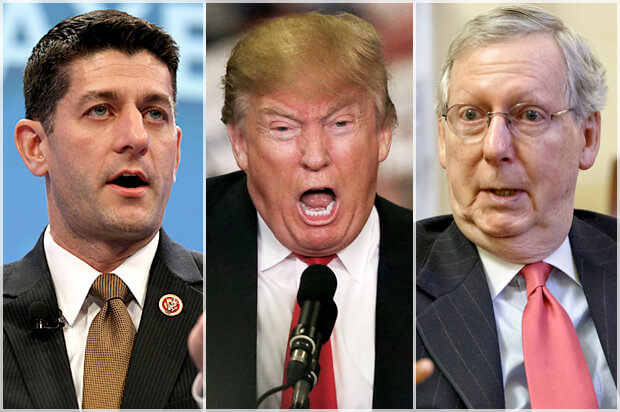 Why replacing the ACA is so tough: part 2

Earlier this week we looked at why the politics of replacing the ACA are way more complicated and challenging for Republicans than some might think based on the seemingly straightforward campaign cry in 2016 to “repeal and replace” the law. Health care. Complicated. Who knew? Part two of “why replacing the ACA is so tough” will unpack the key policy challenges that make the politics of this issue so messy.

While there is no fully-released, draft legislation to replace the ACA — despite Sen. Rand Paul’s attempts to find it — there is plenty to analyze. For weeks, the basic construct that would guide repeal has been evident based on public reporting, with one example here:

This updated package of principles and talking points is also instructive as to the policy challenges the GOP is grappling with in coming up with a repeal bill that can bridge the gaps between many conservative Republicans and their more moderate/pragmatic peers that is part of the fundamental political divide. Let’s break it down into three key areas: health care costs, Medicaid, and access to insurance coverage.

Health care costs: as much as ACA proponents rightly tout the success of the law in expanding access to coverage and reducing the rate of the uninsured, the law has done precious little to control the steady rise of health care costs. Were it not for expensive federal subsidies, many consumers currently covered in the individual market would not be able to cover the significantly more expensive policies sold today under the ACA than existed before the law. Meanwhile, employers have been controlling costs by shifting them onto their employees. That has not fundamentally stopped the ever-rising cost of care, with the flavor of the day being rising specialty drug costs.

If underlying health care costs have not been controlled, there are only two ways to reduce the price of rising premiums that became a hot story during the 2016 campaign: reduce benefits and/or increase consumer cost-sharing. That means under just about any GOP scenario individual market consumers will pay more out of pocket for health care than the ACA’s already relatively high-cost sharing on many popular plans. Consumers will also have less benefits, as invariably a Republican plan will require less in mandated, essential benefits as well as lower actuarial values than the ACA. That’s a mixed blessing though, as while the 60 year old male might not want to buy maternity coverage and some consumers may not think they need mental health coverage, consumers often shop largely by price and whether their doctor is in the network, not by the fine print of a benefit summary. An after-the-fact realization they bought coverage that isn’t as generous as they presumed or ultimately needed is an inevitable trade-off of offering more affordable premium prices. And if the GOP can’t offer lower premiums that “Obamacare,” what’s the point?

That means no matter how much Republicans talking about making more insurance more affordable by repealing parts of  the ACA, the only way to do so means offering consumers less. That will be fine for some consumers. Not so fine for others. Speaking of that divide, pining for high-risk pools as existed before the ACA is no way to address coverage for those that need it being affordable, though empowering states instead with more ability to create reinsurance programs like Alaska could help stabilize the cost of coverage without shunting the sick off to an expensive ghetto for coverage via high risk pools.

Ultimately, there’s no magic bullet of repeal that can change the fact health insurance costs so much because health care costs so much. Thus, no way to lower premiums without taking something away from consumers. The policy challenge for Republicans crafting “replace” is what’s the right balance there? It’s not an easy question to solve.

Medicaid: there might be no greater policy gap than Medicaid, some of which comes down to motivation. Do Republican Members of Congress via Medicaid as a means to cover people who otherwise don’t have access to coverage or do they want to control federal spending? If it’s the former, Medicaid expansion at most is amended, not repealed. If it’s the later, it’s ok to dramatically scale back the federal expenditure of Medicaid expansion and let states — if they want — figure out the rest, potentially impacting coverage for millions of Americans.

“That is a very, very bad idea, because we cannot turn our back on the most vulnerable,” Kasich said.
“We can give them the coverage, reform the program, save some money, and make sure that we live in a country where people are going to say, ‘at least somebody’s looking out for me,'” he said. “It’s not a giveaway program — it’s one that addresses the basic needs of people in our country.”

Republicans who want to repeal the ACA include those that never supported Medicaid expansion and those from states, like Texas, where Medicaid remains unavailable to “able-bodied” adults (aside from pregnant) women. That approach isn’t the majority of Republican thinking across the country and in Congress it’s not insignificant. And the view supporting that approach is “well, they’re able-bodied adults, they should be able to work to afford health care (or health care coverage.”
Yet, Kasich’s point in saying Medicaid expansion “addresses the basic needs of people in our country” gets to the point you rarely hear Republicans acknowledge: the able-bodied working poor who qualify for regular or expanded Medicaid cannot afford health insurance coverage in today’s health care system (nor can many of the subsidized, lower middle class currently covered in the ACA’s individual market). That’s why repealing Medicaid expansion is an incredibly tough nut to crack: fiscal conservatives demand a retreat in Medicaid spending, but a retreat from current coverage levels almost guarantees may will lose coverage.
One example of why that’s a challenge: Louisiana is the first state in the South to do a traditional Medicaid expansion under the ACA, with enrollment starting on June 1, 2016. Since then, in the state ranked 25th for population, over 400,000 state residents enrolled in coverage thanks to expansion. The Louisiana Department of Health dashboard displaying the data also includes statistics showing the number of enrollees being screened for diseases like breast cancer and diabetes, amplifying that the debate about the ACA isn’t just about the size, scope, and expenditures of the federal government, it’s about public health.
It’s clear Republican Governors in expansion states understand that. Some in Congress too. But it’s not clear how many and if they’ll win the policy debate.
Access to coverage: this might be one of the thornier problems in bridging the divide between Republicans because it exposes a fundamental values question. The primary means of providing access to coverage under the ACA, aside from the thorny topic of Medicaid expansion, was via guaranteed issue of coverage (no denial based on pre-existing conditions) as well as the offering of generous (if costly) federal subsidies that made health insurance — previously unaffordable for many — reachable with the advanced premium tax credits offered by the ACA. The key factor on that last point is “advanced.” You can’t offer a tax credit that is only accessible when a person files taxes months later, otherwise you haven’t solved the problem of immediate affordability. Yet some conservative Republicans object mightily to a “refundable” tax credit that could exceed the consumer’s total tax bill. To them that becomes another entitlement program. Maybe, but absent a tax credit in some form that provides the consumer money to buy coverage, many consumers can’t afford it now, and couldn’t afford it on the individual market before the ACA. So, entitlement or not, it’s the only practical way to make coverage affordable — short of expanding Medicaid to even higher income thresholds, which seems like an even less likely outcome than an advanced, refundable tax credit.

All of these policy challenges represent divides in what Republicans think ideologically. One outcome of the ACA becoming law was that enshrined in public policy the idea that universal access to coverage, not just care, was now a national public policy goal. Two smart Republicans, former U.S. Senator Slade Gorton and former Washington State Attorney General said as much back in our 2015 State of Reform Health Policy Conference in Seattle.

Simplifying down past all the policy details that create conflict — even within single political parties — when talking about a complex issue like health care policy, there is a simple question Republicans have to answer to reach a policy solution: will there replacement of the ACA continue that national policy of universal access to coverage or will it reverse that goal?

If the former, it may be a rocky process, but achievable. If not, that likely results in a “replace” in which many covered by the ACA would lose coverage. It’s hard to see that being politically tenable. Thus, probably bad policy. Given opposition of some Republicans to key policy components that make replacing the ACA realistic, its seems improbably Congress can pass a replacement bill without some Democratic support, definitely in the Senate, and maybe even the House.