#SeaHomeless: ‘Under the Bridge’ to help Spokane homeless

Back in 2007, Mike and Jessica Kovac set out on a humble mission to help the homeless in downtown Spokane with 20 brown bag lunches and a case of water.

Since then, their program — Blessings Under the Bridge — has grown into a local outreach effort that serves more than 300 homeless and poor Spokane residents every Wednesday night and has even been profiled by People Magazine.

July 13, 2016 will be Blessing’s sixth annual summer event. The Summer Event Feed will feature wholesome hot meals made by local volunteers and a booth where volunteers will offer help with understanding or enrolling in free or low-cost health insurance.

“The people here are worthy of these things. By looking them in the eye and serving them a delicious meal in a warm atmosphere, we are essentially saying, ‘I see you, I acknowledge you, and I am not going to shun you,’” Jessica Kovac said.

“The Blessings Under the Bridge Program started independently from Molina, and we’re now an avid supporter and contributor.  There are great programs in many communities for the homeless, but many are not fully integrated or coordinated with existing behavioral, physical and public health programs. Molina is increasingly serving as an integrator of the many terrific but disparate services in each community across the state.  Hopefully, Molina’s integration work will help bring greater visibility and connectivity across the many programs for the homeless. We are honored to be a sponsor of the Blessings Under Bridge Program in Spokane.” 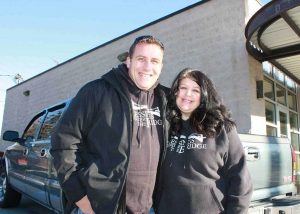 The Spokane Molina office has plans to do four sponsored feeds per year with 15-20 volunteers at each event.

Spokane’s number of homeless people dropped slightly in 2016, according to a one-night headcount of the homeless by the city.

The count found 981 homeless individuals, a 5 percent decrease from the previous year’s tally of 1,034.

The number of homeless people with severe mental illness has also decreased from 2015 levels after growing in the three previous years.