The first app launched on the CareKit platform will be a Parkinson’s app in partnership with these six institutions: 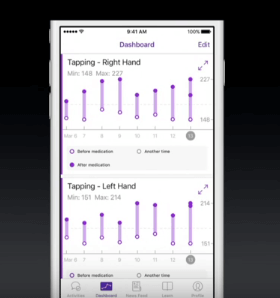 The Parkinson’s app will create a dashboard for patients to monitor their daily activities and motions which can be relayed to their physicians to create tailored treatments.

The second app, created by Texas Medical Center, is aimed to help patients in their recovery process after surgery. Williams explained adherence to post-surgical care instructions, usually delivered through a paper print out, are low nationwide. The sophistication of this app—which uses the iPhone to collect temperature readings, study range of motion, and give medication reminders—will target readmission and infection rates.

Apple hopes that CareKit can recreate the success of last year’s ResearchKit which was used as a framework to gather data for medical research.

“When we released ResearchKit, our goal was simply to improve medical research,” said Williams. “We thought our work was largely done. What became clear to us later was the very same tools used to advance medical research can also be used to help people with their care.”

“Virtually overnight the research studies we launched became some of the largest in history, with tens of thousands of people signing up,” said Williams. “Studies broke geographical boundaries.”

He described Massachusetts General’s use of the app in diabetes research, gathering data to support a theory that there are subtypes beyond Type I and II.

If CareKit has the same popular success as its predecessor there could be a influx of health care apps targeting patient care management.

“It’s amazing that in such a short period of time ResearchKit has a profound impact on the broad area of medical research and our hope is that CareKit can have the same kind of impact on helping individuals manage their care,” said Tim Cook, Apple CEO.

“We think the possibilities here are limitless,” said Williams.