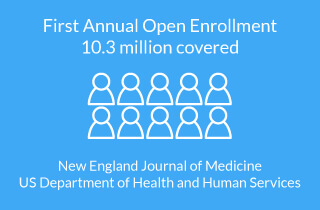 The first annual open enrollment covered 10.3 million, according to a new study by the New England Journal of Medicine. 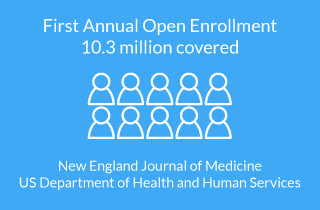 Health and Human Services Secretary Sylvia M. Burwell announced today the release of the study, estimating that 10.3 million uninsured adults gained health care coverage following the first open enrollment period in the Health Insurance Marketplace. The report examines trends in insurance before and after the open enrollment period and finds greater gains among those states that expanded their Medicaid programs under the Affordable Care Act.

“We are committed to providing every American with access to quality, affordable health services and this study reaffirms that the Affordable Care Act has set us on a path toward achieving that goal,” said Secretary Burwell. “This study also reaffirms that expanding Medicaid under the Affordable Care Act is important for coverage, as well as a good deal for states. To date, 26 states plus D.C. have moved forward with Medicaid expansion. We’re hopeful remaining states will come on board and we look forward to working closely with them.”

According to the authors’ findings, the uninsured rate for adults ages 18 to 64 fell from 21 percent in September 2013 to 16.3 percent in April 2014. After taking into account economic factors and pre-existing trends, this corresponded to a 5.2 percentage-point change, or 10.3 million adults gaining coverage. The decline in the uninsured was significant for all age, race/ethnicity, and gender groups, with the largest changes occurring among Latinos, blacks, and adults ages 18-34 – groups the Administration targeted for outreach during open enrollment.

Coverage gains were concentrated among low-income adults in states expanding Medicaid and among individuals in the income range eligible for Marketplace subsidies. The study finds a 5.1 percentage point reduction in the uninsured rate associated with Medicaid expansion, while in states that have not expanded their Medicaid programs, the change in the uninsured rate among low-income adult populations was not statistically significant.

Today’s study does not include data from before 2012, as coverage was changing rapidly during this period. This means the results do not include the more than 3 million young adults who gained health insurance coverage through their parents’ plans.

The analysis builds on previous studies by reviewing a larger sample size and taking into account changes in the economy and pre-existing trends in insurance coverage. Using survey data from the Gallup-Healthways Well-Being Index for January 1, 2012, through June 30, 2014, the authors analyzed changes in the uninsured rate over time. This is also the first study to associate reductions in the uninsured rate with state-level statistics on enrollment in the Marketplaces and Medicaid under the Affordable Care Act, as described in HHS enrollment reports, and to assess the impact of the improved coverage on access to care.