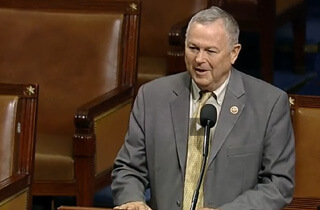 The US House of Representatives voted to halt DEA raids on medical marijuana facilities. In the historic vote of 219-189, a chamber of Congress has, for the first time, protected patients, healthcare providers, and medical distributors of marijuana.

This will be a signal to the administration that they can’t sort of tap dance around this, that they need to get their signals aligned and hopefully they’re aligned with what the House did and where America is going.

What makes the vote unusual is the bipartisan support: 170 democrats and 49 republicans supported the amendment to the bill. The vote comes as a surprise to supporters of the measure. Dan Riffle, Director of Federal Policy at the Marijuana Policy Project told the Huffington Post: “When I saw the vote total, I was shocked — not so much that it passed, but by the margin […] I figured we might get lucky and pass it by 5-10 votes, but never thought a 30 vote margin was a possibility.”

The amendment was added to a federal agency funding bill, impacting both the Department of Justice and the Drug Enforcement Agency. That bill still needs to be approved but this is more likely. Journalist Aaron Houston makes the case that this is a populist change, “As of this writing, Americans in 30 states live under medical marijuana laws. That number will likely increase to 33 within a matter of days as governors in three states are expected to sign new medical marijuana laws in Florida, Iowa, and Minnesota. That means the number of Americans who live in states with medical marijuana laws has doubled to 60% as compared with 29% in 2012 when the last vote occurred.”

In the end, this means providers may have another treatment option in thirty states—and one that’s competitively priced when compared to brand pharmaceuticals.