In a recent article in the Washington Post, author Niraj Chokshi, compared the growth of the two biggest drivers of state spending: health care and prisons.

“The median growth on prison health care among states was slightly more than 50 percent from 2001 to 2008, according to official data from 44 states analyzed as part of a joint initiative of the Pew Charitable Trusts and the John D. and Catherine T. MacArthur Foundation. Those 44 states spent $36.8 billion on prisons in 2008, and health care accounted for more than one-sixth of that spending. (2008 was the last year covered in the study by the Bureau of Justice Statistics, which Pew used for its analysis.)” 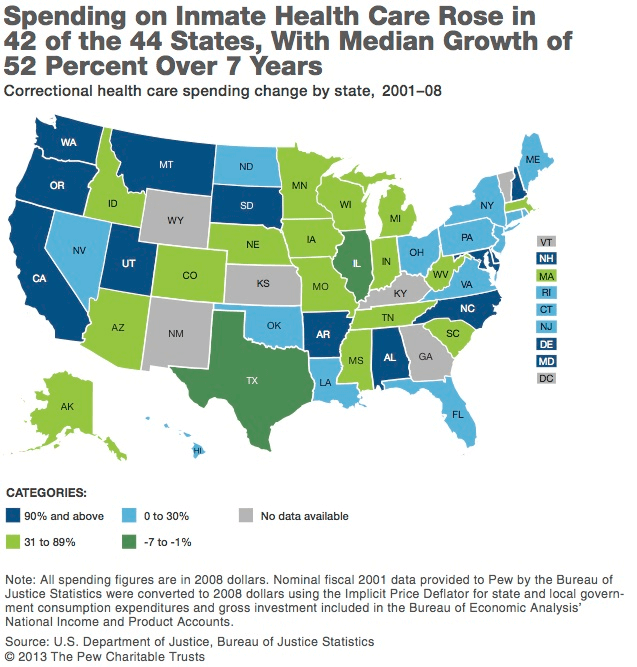 According to the study published by Pew, there a three distinct factors driving state prison health care costs: aging inmates, the prevalence of physical and mental illness, and the costly nature of health care delivery to a prison’s inmates.

“The nation’s elderly prison population is still relatively small, but it’s taken up an increasingly larger share of the total population. In 1999, about 3.4 percent of the prison population was 55 and over. By 2011, it was 8.6 percent.” 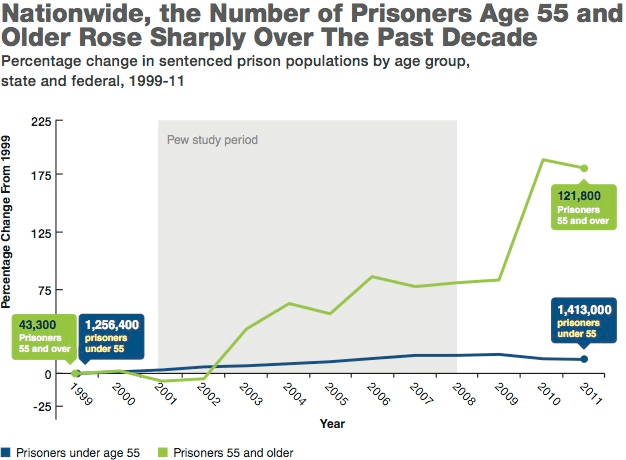 As the populations in prisons age, the more expensive their health care will be.

“In Michigan, a state study found that in a single year (2009) health care for inmates ages 55 to 59 cost more than four times more than for those aged 20 to 24. In Georgia, caring for prisoners ages 65 or older costs about $8,565 per inmate each year. The average annual health-care cost for Georgian prisoners under 65? $961 per inmate.”

Chokshi then asks how do states deal with their increasing health care and prison costs? According to experts interviewed by researchers at Pew, states are trying to control their costs by providing remote health care, outsourcing their health care providers and delivery system altogether, enrolling prisoners in state Medicaid programs, and paroling elderly or sick inmates.

Releasing low-risk older prisoners could help drive down costs and prison size, too. Ohio expects to save more than $46 million and slash the prison population by 7 percent over three years by granting parole to more of its elderly prison population. New York, Illinois, California and Connecticut have also pursued similar policies for low-risk elderly and/or sick inmates.”