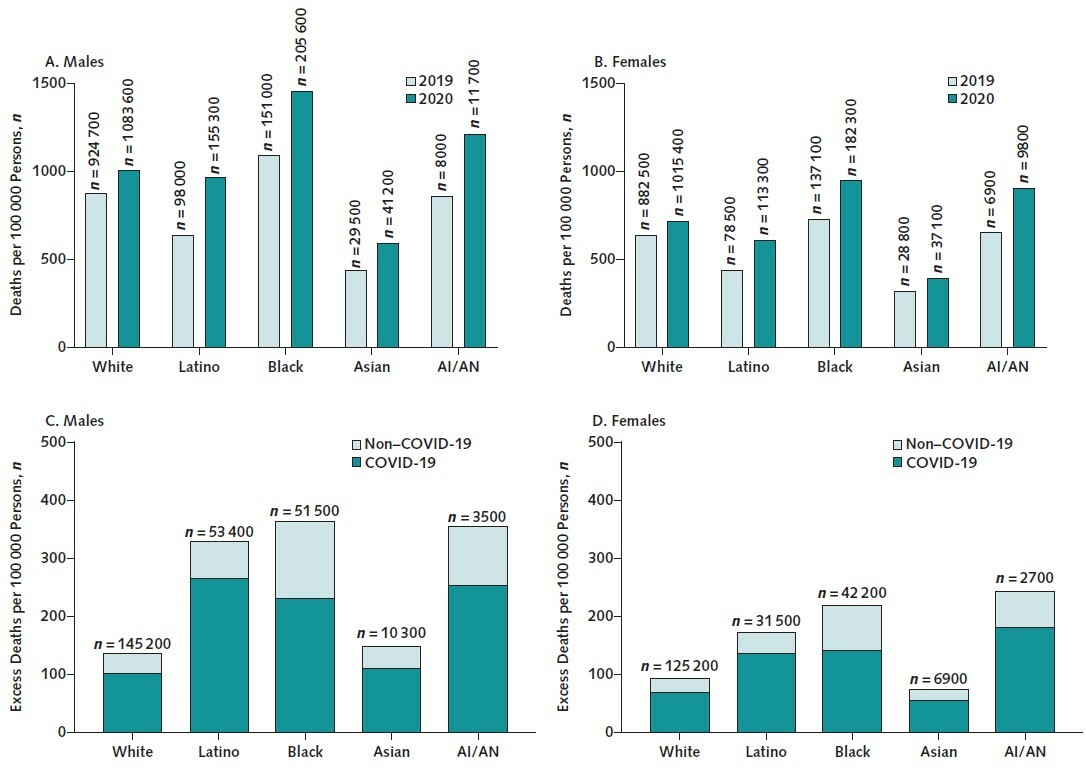 Excess deaths higher among Black, Indigenous and Latino adults during 2020

Excess deaths have been more than twice as high among Black, American Indian/Alaska Native and Latino adults during the pandemic than their white and Asian peers.

That’s according to a surveillance study published by the National Cancer Institute on Oct. 5, which calculated excess deaths in the U.S. between March and December of last year. Excess death measures all deaths, including those from COVID-19.

An estimated 2.88 million people died during that time period in the U.S. Compared to the number of expected deaths based on 2019 data, there were 447,200 excess deaths, with 74% of these deaths attributed to COVID.

The report found that excess deaths per 100,000 people among Black, American Indian/Alaska Native and Latino adults were more than double those seen in white and Asian adults. Non-COVID deaths also disproportionately affected these same populations, and were two to four times higher. Non-COVID excess deaths include people who died due to conditions like diabetes, heart disease and Alzheimer’s. 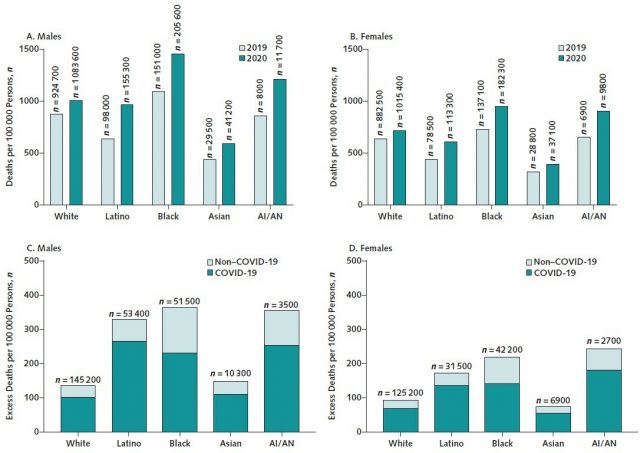 Racial disparities were especially noticeable among those aged 75 and older, as non-COVID excess deaths per 100,000 were nine times higher among Black males compared to white males.

The life expectancy gap between Black people and other groups has widened.

“The steady progress over the past 20 years in decreasing the mortality gap between Black and white persons has been rapidly eliminated by the COVID-19 pandemic and is likely to worsen as the full effect of the pandemic becomes apparent.”

These racial and ethnic disparities in COVID risk, hospitalizations and death have been credited to structural and social determinants of health, with roots in racism, the report states. Black and Latino people are more likely to be exposed to COVID at work than white people, and are more likely to live in multigenerational households in more dense neighborhoods with less access to health care.

American Indian/Alaska Native reservation-based communities are at further risk of infection due to a lack of infrastructure and chronically underfunded health care facilities, the report states.

To better address these health disparities, the report recommends a more equitable approach to vaccine distribution.

“Communications that focus on the safety and benefits of vaccination and are tailored to high-risk communities and coordinated community-mobilized vaccination promotion programs from trusted sources are needed to overcome vaccine hesitancy, as has been shown by high vaccination rates across American Indian/Alaska Native communities,” the report states.

In a recent panel discussion hosted by State of Reform, Celeste Hodge Growden, president of the Alaska Black Caucus, said to counteract vaccine hesitancy, the Anchorage Health Department convened a group of diverse community members to hash out strategies to overcome vaccine hesitancy.

This allowed them to reach communities and people who had yet to receive vaccines throughout the city.