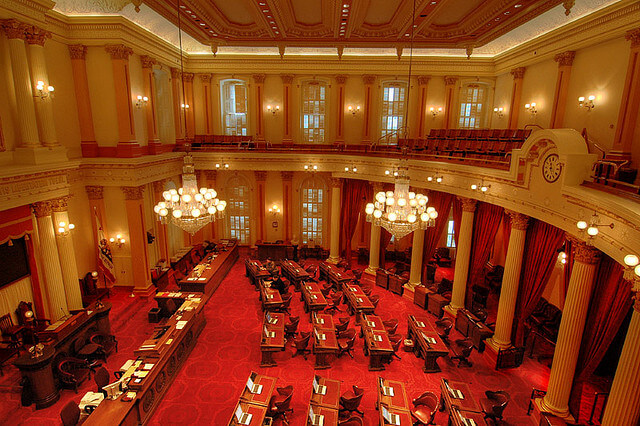 The California Senate Health Committee held an informational hearing on Nov. 23 that suggested private insurers have not fully complied with free testing regulations and that adhering to these mandates is not always straightforward for health plans. The committee met to discuss the role of private insurance in COVID-19 care, and testimony revealed a lack of compliance from health plans in providing free testing to enrollees.

California resident David Sharp testified that his son went to get a test and was told to come back the next day. When he returned, he was told the testing was moved inside and was sent to the ER to get one. He was charged for the test and ER visit even though his insurance was supposed to cover tests. Sharp said they did not receive the result of the test and that the insurer paid 40% of their bill, leaving them with a financial burden they should not have.

The Families First Coronavirus Response Act (FFCRA) requires public and private insurers to cover FDA-approved COVID-19 tests when “medically appropriate” and as long as the patient is exhibiting symptoms. This requirement was expanded by the CARES Act’s stipulation that insurers must also cover out-of-network testing costs for patients (up to a cash price that the provider posts on their website).

Sabrina Corlette from the Georgetown University Center on Health Insurance Reforms explained that under FFCRA as amended by the CARES Act, health plans must cover diagnostic COVID-19 testing and the items delivered during provider, urgent care, or ER visits that result in a COVID-19 test. These also apply to in-person and telehealth visits.

“In June, three federal agencies — HHS, Treasury, and Labor — issued guidance that clarifies the scope of the FFCRA mandate. They stated that insurers are only required to cover medically appropriate tests as determined by a licensed health care professional, and they said that plans and insurers are not required to cover workplace testing, testing for public health purposes, or testing for generally asymptomatic individuals if there’s not a doctor’s order,” she said. “They also clarified that in order for the coverage mandate to kick in, a COVID test must be ordered or administered during the visit.”

California is one of several states that have implemented supplementary requirements for testing coverage. Health plans in California are required to cover tests for groups like essential workers, nursing home workers, and child care workers.

The first group is recognized by federal law and includes people with symptoms or exposure. This group can get testing in or out-of-network with no cost-sharing.

The second group includes essential workers like health care providers, teachers, food service workers, and first responders with no known exposure. Testing is “medically necessary in all cases” for this group. The third group includes asymptomatic people who are not essential workers. Health plans must cover testing when medically necessary for this group. Enrollees may have to pay ordinary cost-sharing. The second and third groups are recognized by emergency regulation.

“Trying to make a complex regulation operational for millions of people is challenging for all parties. CAHP members have identified two significant areas of concern: one, a dramatic increase in the number of out-of-network claims for testing, and two, a significant variability in testing costs between in-network and out of network providers and labs.”

Health plans are doing their best to comply with free testing requirements, he said. According to Louizos, 50% of Californians (12-13 million people) are considered essential workers under group plans. Having to suddenly cover this many people can be challenging for some plans, he said.

Louizos went on to say that a potential explanation for the increase in out-of-network costs is that employers might be taking the DMHC regulations to mean they could contract with their own testing vendors, and enrollees could go to any out-of-network testing vendor and simply submit the bill to the health plans. He believes this is a misinterpretation of the DMHC’s regulations and is leading to a high number of bills being received by plans.

Louizos also explained that it is often difficult for providers to identify which patients are eligible for free testing and which are not.

“The asymptomatic/symptomatic distinction does prove to be a practical and operational problem for the providers and for the plans, for the purposes of complying with the regulations,” he said.

Kelsey Waldron from Bay Area Legal Aid told the committee that she often receives complaints from clients saying they are unsure about their coverage or eligibility for testing.

“There is just a general sense in the community that COVID testing will be covered. Consumers don’t have the more nuanced details,” she said. “Most consumers who call us don’t know who their health plan regulator is. They don’t know if they have a federally-regulated plan or a California-regulated plan, so consumers really are in the dark here about what is covered and what is not.”