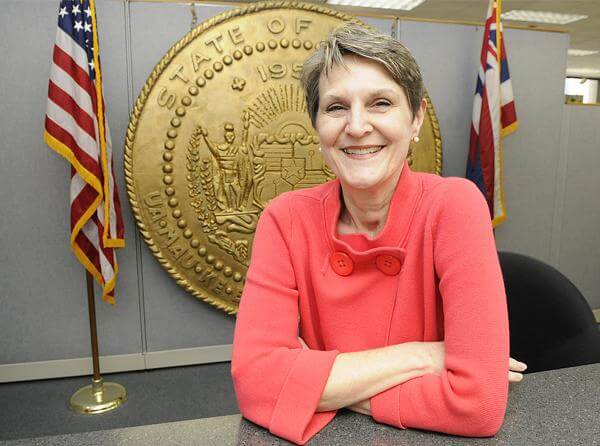 Beth Giesting is the Director of the Hawai’i Budget & Policy Center. In a recent blog post titled “Avoid public sector cuts at all costs during a recession,” Giesting spoke out against Gov. Ige’s proposal to cut state workers’ salaries by 20% due to the state revenue shortfalls stemming from COVID-19.

In this Q&A, Giesting describes the potential impacts of Gov. Ige’s proposal and the actions she recommends to better support the state economy.

Emily Boerger: You recently wrote a blog post about Gov. Ige’s proposal to cut state workers’ salaries by 20%. From an economic standpoint, can you walk me through why you think this is the wrong path forward?

Beth Giesting: “It is a pretty-well accepted principle that government has to spend money to restore the economy when the private sector is paralyzed. Recovery from the Great Recession happened because governments put money in the hands of people and businesses to stimulate spending. The International Monetary Fund found that imposing cuts in government spending on Greece after the recession made the situation worse: spending less retarded recovery and economic growth.”

EB: Can you also talk me through some of the specific monetary impacts of cutting these salaries? Such as spending decreases, etc?

BG: “A 20% cut to state worker salaries would amount to about $700 million, but the multiplied effects would be 1.5 times that due to reducing workers’ ability to spend money and circulate it through the community. That means we’d reduce our fragile economy by $1.05 billion just when we need to build it up. There would be a similar negative effect from cutting other things the state pays for: contracts that support nonprofit service providers, paying for capital projects, or buying supplies – any cutbacks would result in job cuts and reduced economic activity, setting the state back instead of moving us forward. It would also be a mistake to cut back on retirement contributions and debt service because those affect our credit rating and ability to borrow money cheaply.”

EB: If workers leave the public sector, how might this make the COVID pandemic worse?

BG: “Budget cuts would reduce our capacity to test, track and treat COVID-19, but also would reduce our capacity to help families with food and other essential needs right now, put together the kinds of on-line systems the state needs for learning and delivering other public services, and cripple our ability to get businesses back on their feet. The state is also the steward of a lot of federal money meant to do all those things and more so we need to maintain, or maybe even increase, capacity.”

BG: “COVID-19 is exposing tremendous economic inequities in Hawaii. Low-income and hourly workers were the first to get their jobs cut. A recent survey shows that 33% of workers who lost their jobs made less than $30,000/year and another 36% made between $30,000 and $50,000. We should also look at who is at risk for exposure to the disease: the grocery clerks, bus drivers, and delivery people we’re all relying on right now are also more likely to be paid hourly and earn less then median wage.”

EB: Rather than the 20% pay cut, what steps should the state government take to better address these issues and support the economy?

BG: “I’m sure the state is already looking at the Rainy Day fund and could look into other funds that could be borrowed from, like the Hurricane Relief fund, but we need to be prepared to do the unusual thing if there isn’t any federal relief for states. Hawaii, like other states can’t borrow to fund operating expenses except in the event of an emergency such as we have now. Economists now agree that there’s nothing wrong with a responsible government borrowing responsibly, and, in fact, believe that it would irresponsible to do otherwise. The Federal Reserve has money available for states and municipal governments to borrow at favorable rates. Hawaii would qualify for $3 billion from those funds.”

EB: What do you think are the long-term economic impacts that we’ll see from the COVID-19 pandemic?

BG: “I’m hoping that we use the lessons learned now to develop a truly diverse economy that offers more for everyone. We need to understand that the old economic order had been failing many Hawaiʻi residents for decades, with widening gaps between wages and costs. That just isn’t sustainable. The new economy needs to be built on fairness, equity and opportunity, and it needs to ensure adequate housing, good education, care for the  environment, reliable infrastructure for technology and transportation, and a sustainable food supply. All of those things are also essential for good health.”