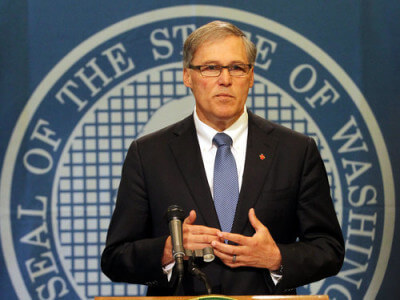 You may not know Brian Bonlender, but you should.  He’s the Transition Director for Governor Elect Jay Inslee, who also served as the long time Chief of Staff for Inslee while he served in Congress.

Bonlender is perhaps as close to Inslee as anyone, particularly on matters of policy.  In his current role in the transition, his task is to empower a broad set of voices to contribute input to the formation of a new government.

However, more importantly, when one listens to his measured comments on transition matters, one knows his words are perhaps more closely aligned with Inslee’s than anyone’s.  He’s the Governor-Elect’s emissary in the transition in a way few others can play – and certainly not as well.

We got him on the phone – at 9:30 pm after another long transition day – to talk about “standing up a government,” what it’s like working with Inslee, and what his future might hold.

This is part one of a two part series.  The content is edited for length.

Q:  What is the transition’s approach to staffing senior health care positions in the administration?

The timing is predicated on two things that we’re balancing.  One is finding the right people, which includes looking locally, in state and out of state.  Secondly, we’re also mindful of the legislative session, and the need to have positions filled for the session.

Transitions definitely feel an urgency to fill positions quickly.  However, they are most often going to be remembered by the quality of their picks rather than the speed with which those picks were made.

We are interested in finding capable, qualified administrators who see eye to eye with Gov. Elect Inslee, and who can get to work implementing his policy vision for the state.

Q:  When you are thinking about health policy, what are the elements that are at the fore of your thinking?

Health care policy in this country and in this state specifically is at an exciting and a critical time.  It’s critical because of two reasons.

One, we are implementing the Affordable Care Act, which is an effort that has culminated years of work to reduce health care costs, provide access to those who need coverage, and do things like eliminate the hidden tax that all of us who are covered pay to cover the uninsured.

The second thing that makes this a critical time is the role health care plays in our economy.  Health care inflation is a huge long term structural problem with our economy and with government budgets both at the state and federal level.  Until we get health care inflation more in line with that of the rest of the economy, we are going to continue to see education budgets reduced.  We are going to continue to see disinvestment in critical infrastructure and other things that are important to the long term the health of our economy.

Q:  I see you have an early announcement out for DSHS.

DSHS is a priority agency.  It’s a complicated agency that requires an in depth search, and we’ve started that one early.  We’re going to take as long or as short as we think it’s going to take to have the right person in that agency.

Q:  How are you picking which jobs to fill in which order?

The order of these things are reflective of a few different factors.  The priority is one, but another is timing.  Some agencies might have an existing director that we deem competent that is willing to serve into the next year on a temporary basis, that may or may not want to stay, and which we’ve not decided whether to keep them.

Sending out an announcement does not reflect on whether we want to keep an existing director.  We’re going to have a thorough public process for each of these positions, regardless of the preference of the current occupant to stay or not to stay.

Those who want to stay, we’re going to give them appropriate and due consideration.  But, this is a new administration.  This is not a continuation of a previous administration.  And Jay is committed to bringing new blood and new, innovative ideas to Olympia.

Part 2 in this series will be posted tomorrow.