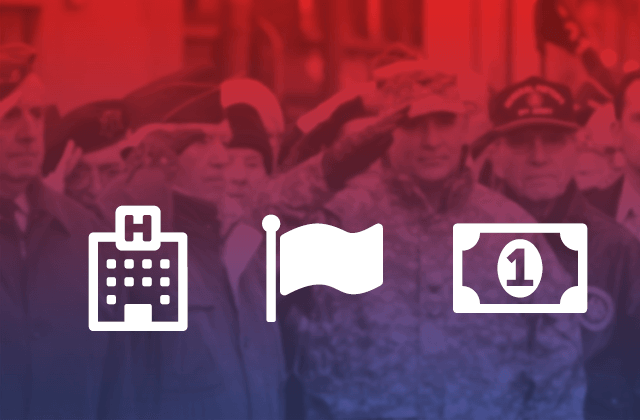 The recent Veterans’ Administration “choice card” program faces criticism for confusing regulations surrounding use. 27,000 out of 21.4 million total veterans have made one or more appointments for care. The VA health system is one of the largest hospital and health center networks in the country yet has lingering wait time issues.

With these factors in mind, will privatizing the VA health system occur? Or, rather, expansion of the “choice card” system?

The VA health system serves a unique population with common ailments
Incidences of traumatic brain injuries (TBI) among veterans are higher than the general population (especially veterans of the recent Afghanistan and Iraq conflicts). Oddly enough, football players are the closest corollary with their complex interplay of concussion and dementia later in life. Seattle Seahawks owner Paul Allen donated $2.4m to studying the neuroscience behind traumatic brain injury at the University of Washington. The VA benefits culturally from serving a population with similar experiences and, at least earlier in life, similar injuries and baseline health.

Shifting to private market more complicated than dual-eligibility
As one of the largest health systems in the US, the Veterans’ Administration could not privatize overnight (or overyear). The costs would be staggering considering $59.1 billion is spent on veteran medical costs alone spread across 151 medical centers and 827 outpatient clinics. Labor and unions would rightfully be concerned as to where they’d work. These two factors help make for a political non-starter.

Niche value will decrease with aging veteran population
Retiring Vietnam-era baby boomers and advanced World War II survivors will increase their utilization of the health system. While some service-connected injuries do correspond to ailments later in life, many conditions won’t relate to the niche benefits that the VA offers. Indeed, the arbitrary 40 miles distance from a VA clinic to qualify for “choice cards” poses a significant hurdle for those in hospice and nursing home settings, esp. since it doesn’t account for geographic limitations. The 40 mile radius is an all-day trip from many rural locations in Washington and Alaska.

Tighter government spending won’t sate increased demand for care
As great as advancements in treating TBI and PTSD are, the aging veteran risk pool will need more access to care. This comes in an era where centralized health facilities face scrutiny as volume-based, fee-for-service reimbursement models decline in government-sponsored plans. As privileged a status as veterans hold in society, the Veterans’ administration is not immune to charges of administrative fraud, waste, and abuse as evidenced by the recent scandals.

Will the VA health system ever privatize? No, not likely, even in the current political climate. House Republican policymakers, despite efforts to curb domestic spending, find veterans (and spending around them) their golden calf. However, the “choice cards” might be the pathway to local, private care for many veterans, despite Obama administration efforts to divert funds from the “choice card” program.