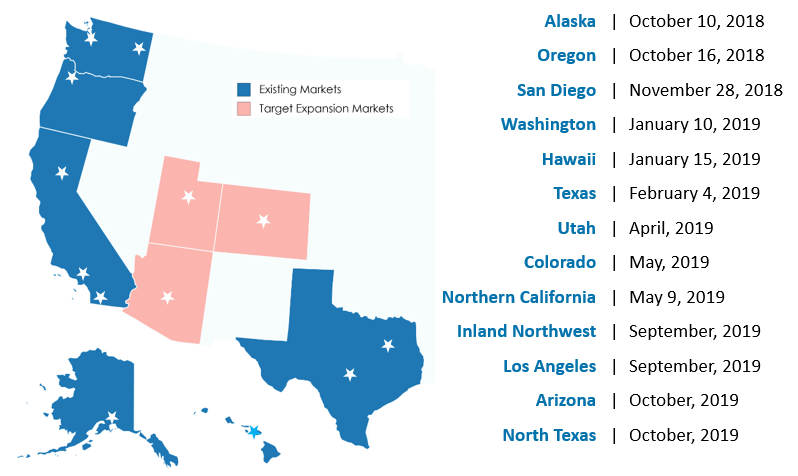 Last week, we made a very subtle but hugely important change to our site at StateofReform.com.  You may have missed it, so I wanted to call it out to you.

First, to preface, as we enter 2019, State of Reform will now be covering state health policy in 9 states, as well as key federal health policy action.

That’s a lot of states to cover!  If you’re wondering, they are:

Referral patterns are local.  Regulatory environments are local.  Payment contracts and provider networks – they are all local.

So, if you’re in Oregon or Texas, you probably don’t have a lot of interest in Utah or Hawaii.

That’s why we build StateofReform.com to be as localized as possible.  The featured content you see on the opening slider on the home page is tailored to the state in which your IP address is located.  This can be updated if you select news from a specific state in the drop down menu.  In other words, if you pick Alaska news, you’re going to see Alaska news featured in the slider.

Here is what has changed:  with this many states, we have now launched an edition model of State of Reform.

We now have three editions:

The West Coast edition features news from just the five west coast states:  WA, CA, OR, AK, HI.  The latest news in the top left menu are stories from these five states.  Likewise, the South West edition has news from just TX, CO, UT, and AZ.  Each edition includes a sub-navigation of each state where you can click between states to scan the headlines in that specific state.

The National Edition is for those site visitors that are not located in one of these states or which have not yet selected a specific state to follow from the drop down menu of News.  It won’t have the sub-nav menu, but all states covered by State of Reform will be on the drop down menu under News. Once you pick a state, the site will place you in the specific edition that corresponds with the state you selected.

This is a small change, but here’s why it’s such a big deal for us.

We’ve never added three new states all at once before.  As we’ve grown, we’ve always been able to add one state in an incremental fashion.  Now, we’re going from six states and one edition, to nine states and two editions.

One thing we’ve learned about our model at State of Reform is that it requires scale.  It’s too hard to track state health policy year round, and hold a large, multi-stakeholder event in a market, and do it sustainably with a team of highly talented and specialized folks.  So, growth is really a requirement of our future success.

It has been because of the support of sponsor organizations and attendees at our events that has allowed us to get our feet underneath us, and to build State of Reform into a model that – at least so far appears to be – truly unique in the nation.

We wanted to share this news with you about a subtle but important change in our work at State of Reform to give you a bit of a window into our progress here as an organization.