We’re hearing some pretty honest talk about the challenges of implementing health exchanges lately, which is refreshing and which we’ve included in part below.  It’s almost an overwhelmingly hard task.

It dawns on us though that this sort of sincere talk about this difficulty – from plans and regulators – is in shorter supply than needed.  And, frankly, sort of reinforces why we’re doing what we’re doing:  sharing information which we think is worth watching in health care today.  Here are 5 Things for June.

1. The most honest 4 minutes on the exchange you’ll hear

Rocky King, the CEO of Oregon’s health insurance exchange, gave a watershed presentation two weeks ago.  Why?  It was honest about the full scope of challenges related to implementing the exchange there – something that was refreshing to hear from such a credible speaker.

Sure, Washington has been called a national model by Pres. Obama.  That doesn’t mean this transition is going to be either seamless or easy.  It will be neither.  But it’s just not something one hears much about here in Washington.

Start at 1:08.20 and listen to the four minutes which follow.  Powerful.

According to the Tacoma News Tribune, MultiCare has placed a series of liens against patients it treated as trauma victims – not because of a lack of insurance or payment by patients.  Rather than bill medical insurance, the hospital system tried to collect higher payments from legal awards patients might receive as a result of their trauma.

Here’s MultiCare’s statement on the matter provided to KOMO.  Here are the plaintiffs’ complaint and motion for injunction.

If true, this story is an audacious example of some of the most aggressive billing practices we’ve ever heard about — skipping insurance altogether, filing liens for personal property first, and creating fake addresses for out-of-state corporations to handle the paperwork.

We are thrilled to be hosting our first event in Spokane this year – our 2013 Inland Northwest State of Reform Health Policy Conference!

Our Convening Panel is set, and meets in a few weeks.

We’re also excited to announce our early Event Sponsors, Providence and INHS!  Without them, there wouldn’t be an event.  Registration will open soon! 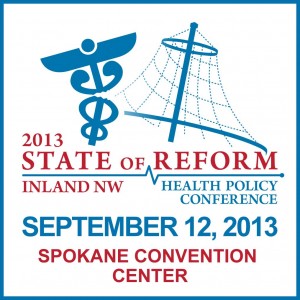 4. August will look very different than May for health plans

“The number of approved plans in the market that you’ll see at the August 21st meeting will be very different than the plans you saw at the May meeting” when applications were first submitted.  This from Deputy Insurance Commissioner Beth Berendt presenting before the Exchange Board yesterday.

After 50 days of review by the OIC, Berendt said she had two plans identified as “green” or having successfully completed the form filing review process.  That is two plans from among more than 250 plans offered by carriers for January 1, 2014.  The “green” label – as compared to yellow, red, and black – was not a reflection of the network adequacy, or acceptance of rates, both significant steps left in the review process.

Our post includes Berendt’s comments that some plans were “so far off” they were disapproved early.  Some plans are getting there, and are expected to make it through the OIC portion under the deadline (end of July).  Obviously, some plan submissions remain open questions.

5. “No other state has so many such affiliations under way”

The response to recent merger activity between secular and Catholic hospital systems has grown more reactive in the last six months, and worth watching.  Case in point was the recent response to the PeaceHealth-UW collaboration announcement and how it differs from the reception of the Providence-Swedish merger.

While most media coverage was straightforward (OR, AK, WA), the Seattle Times produced a story that was focused on access to reproductive health care rather than the collaboration.   It strikes us as the result of a larger effort by organizations to work the media, courts and policy makers to sensitize them to a potential loss of access.