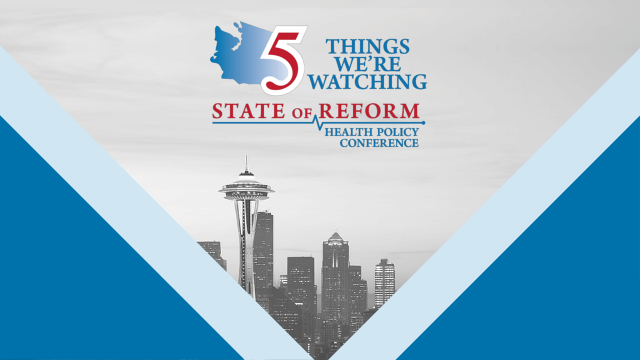 I’m really proud of this edition of 5 Things, because it provides content and stories from our team at State of Reform that you won’t find anywhere else. Personal stories from immigrant women and their health status? Check. Interviews with key legislators? Check. Issues that will reshape part of the market in ways most will overlook? Check.

So, thank you for reading our stuff and allowing us to play this role. All of our work is funded through your engagement with us at our conferences. We’ll have more about our fall event in the weeks ahead, but until then, here are a few things we think are worth tracking in Washington State health care for the end of April.

Washington’s 2021 legislative session wrapped up over the weekend, concluding what was an impressive session for progressives. We caught up with Rep. Eileen Cody, Chair of the House Health Care & Wellness Committee, to get her take on the health policy themes that emerged this session.

Cody says health equity, the COVID-19 response, and public health were some of the top issues in the health care sphere. She also described Sen. David Frockt’s Cascade Care bill as one of the biggest health policy bills to move forward this year (more on that below). As it relates to the budget, she says funding for mental health and substance use disorder were probably the biggest adds, along with public health support and funding for exchange subsidies. “I would say that there wasn’t a lot of glitz to the things that happened in health care this year, but certainly it got a huge infusion of money.”

2. WSHA calls for veto of section in public option bill

In a letter sent to Governor Jay Inslee’s office on Tuesday evening, the Washington State Hospital Association called on the governor to veto a portion of the recently passed legislation that would require certain hospitals to contract with a public option plan. The bill, SB 5377, includes a broad range of new provisions aimed at increasing the affordability of standardized plans on the individual market.

WSHA is calling on Inslee to veto section 5 of the bill, which outlines the public option participation requirements. They write that there is a discrepancy in the language used in the final bill and the colloquy offered in the Senate on April 19. The association says it is concerned that the colloquy “indicates an intent that contradicts the plain language and meaning of the section.”

Bill sponsor Sen. David Frockt describes the negotiation process on this bill as “torturous” and says he’s “fairly livid” about the veto request. “The bottom line in my mind is that if the governor were to veto this section, he is likely ensuring that the public option will not take root throughout the state.” Frockt is strongly urging the governor not to veto section 5.

3. How health equity showed up this session

The past year shined a spotlight on the systemic inequities ingrained in our institutions. In response, lawmakers this year in Washington put a priority on addressing inequities, specifically through reforms to health policy.

Health equity bills that passed this year include SB 5068, which extends Medicaid postpartum coverage to one year after birth, and SB 5228, which requires public medical schools in the state to develop a health equity curriculum. Lawmakers also passed SB 5052, which requires the DOH to use data to identify health equity zones, and SB 5313, also referred to as the Gender Affirming Treatment Act. Our rundown of how health equity showed up in this legislative session is available here.

4. Stories on immigration status and health

A recent report from the Health Equity for Immigrants Campaign says that in 2018, an estimated 46% of undocumented individuals were uninsured in Washington. A Kaiser Family Foundation analysis estimates that 17% of the state’s uninsured population are ineligible for financial assistance through the ACA Marketplace due to citizenship.

In this extensive piece, State of Reform Reporter Sydney Kurle spoke with three women about how their immigration status and lack of insurance impacts their health. “I would ask that just as we are considered essential workers during the pandemic, that we’d be treated and included into this country that we contribute to the economy of,” said one woman. “We have to make choices such as to keep a home and have food or take care of our health,” said another. You can read their stories here.

A trio of insurance industry organizations filed a lawsuit challenging Kreidler’s emergency rule in the beginning of April, but last week a Thurston County Superior Court judge denied the request to halt the ban. Insurance companies have until May 6 to file rating plans that comply with the emergency rule which goes into effect on June 20.