In the last seven days, the average daily rate of infections is down across Texas by 32%. That’s the good news. However, even those reduced trends would mean one in 16 Texans would become infected with COVID over the next 12 months.

With that as context, Steve Love, CEO of the Dallas-Fort Worth Hospital Council, has good advice for us ahead of this Labor Day weekend: “Remember what happened over Memorial Day and resulted in a large increase in COVID-19 community spread. Let’s not repeat that over Labor Day. Co-existing with COVID-19 is a marathon not a sprint so don’t let your guard down this holiday.

Rep. Evelina “Lina” Ortega serves El Paso in the state House as a member of the Committees on House Administration, Public Health, and Transportation. Ortega gave reporter Haley Donwerth an update on COVID-19 and the bills she’s teeing up for the next legislative session, including a bi-national health plan to address cross-border health crises.

“There will be a strong push for Medicaid expansion next session to work on lowering the numbers of uninsured. I want to continue to push the community health workers bills, because they are proven to be very effective. I will continue to push for access to lactation services and postpartum care, especially among low-income women, and I will be working with our incoming senator to develop a bi-national health plan to address health crises along the US- Mexico border.”

Rep. Garnet Coleman has served his Houston district in the Texas House of Representatives continuously since 1991. He is the senior ranking member of the Public Health Committee as well as the Chairman of the County Affairs Committee. Rep. Coleman joins us in this edition of “What They’re Watching” to discuss past, present, and future Medicaid expansion in Texas. This interview was filmed before the pandemic hit, but I expect this message on the safety net will be one we will continue to hear about in the months ahead.

“That’s the part about Texas; we’re kind of weird in that we do have a sub-safety net, we’ve been one of the cheapest states when it comes to Medicaid, at least in terms of what’s in the benefits package, but it’s gotten worse. That’s why more people are uninsured, because we’ve actually cut out areas of coverage that we used to cover on the Medicaid program.” 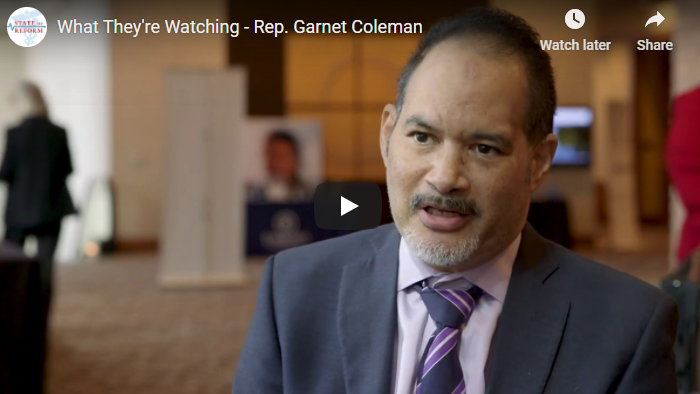 A few weeks ago, released our Topical Agenda for the 2020 North Texas State of Reform Virtual Health Policy Conference on October 6th! We got a lot of good feedback and a number of folks to sign up early – so thank you for all of that… Our agenda is built based on the input from stakeholders across all silos in the Texas health care system. We do that informally through emails with readers, phone calls and conversations. Our Convening Panel helps us with more formal input, too, which is the backbone of our agenda-setting process.

Next week, we’ll be releasing our Detailed Agenda with panel descriptions and our list of over 50 speakers curated for you to make one of the smartest days of conversation in Texas health care. We’ll be exploring politics and policy in health care, asking whether COVID has changed the Medicaid calculus, and diving deep into tele-health growth, hospital financing, and racism as a public health issue.

As always, drop us a line if you’d like to suggest a speaker and get yourself registered today to be with us next month!

Hurricane Laura is exacerbating pollution in Port Arthur, Texas – an area laden with oil refineries, petrochemical plants and plastics facilities. According to reports submitted to environmental regulators, facilities in Texas released more than 4 million pounds of extra air pollution in the two days before the storm made landfall. The reporting suggests residents with pre-existing conditions are at greater risk of experiencing a severe case of COVID-19, should they get sick.

One environmental group told NPR that excess pollution and hurricane season in the region go hand in hand, as petrochemical plants often burn excess fuel and chemicals that can’t safely linger in pipes during a storm. In response to the hurricane, CMS announced it may wave certain Medicare, Medicaid, and CHIP requirements, as well as create special enrollment opportunities for individuals to expedite access.

For the month of August, FiveThirtyEight’s average national polling shows Vice President Joe Biden with about an 8 point advantage over President Trump. But if we look back at presidential elections over the past 40 years, a lot can change between August polling and election day results. Remember when that July 1988 Gallup poll showed Michael Dukakis with a 17 point lead over George H.W. Bush? Jimmy Carter was ahead around this time. Hillary Clinton was ahead around this time. You get the idea: there is plenty of time for races to shift in the 61 days between now and November 3rd.

So, as we head into Labor Day and the start of the final push to election day, we wanted to put summertime polling in context. One pollster recently estimated that about 10 percent of voters are likely undecided. Moreover, some Trump-friendly demographics are difficult to reach and there aren’t enough large sample, quality polls that succeed in including these voters.